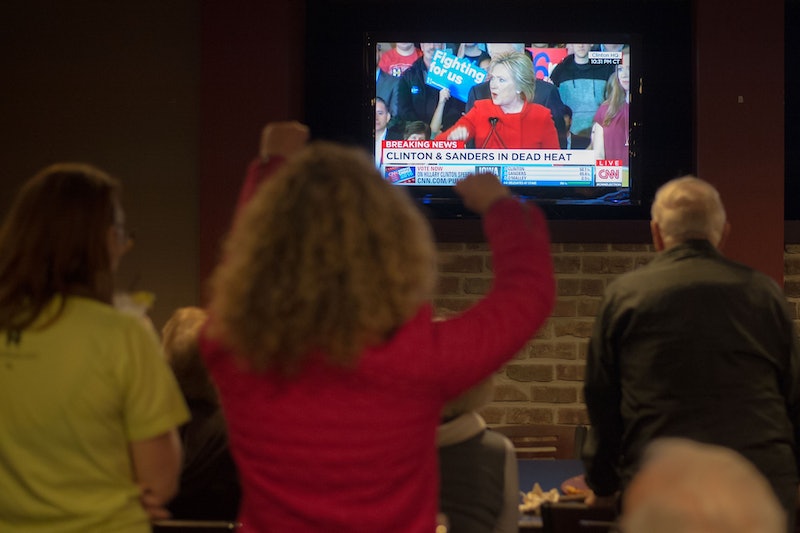 If you were closely following the incoming results of the Iowa caucuses Monday night, you likely noticed that, several times, the candidate who had the highest percentage of the popular vote didn't necessarily have the most delegates allotted to them. The electoral system is confusing, and it's easy to pay more attention to the popular vote percentages than to the delegate count. But the number of delegates is actually the most important figure for determining which candidate wins the primary election. That's why it's essential to understand what delegates are, and how they function within the electoral system.

The purpose of the primary is to decide who will be the Democratic and Republican nominees for president. These decisions are made by the number of delegates supporting the candidates at the Democratic and Republican National Conventions in the summer. Delegates are people from each state who attend the conventions to select the presidential nominees for their respective parties. The number of delegates from each state varies depending on the size of each state's population. The situation becomes complicated when we look at how the delegates decide which candidate to support, and how many delegates are ultimately allotted to candidates. The answers vary for both parties and for different states.

One of the most important things to know is that some delegates have to show support at the conventions based on the results of their state's primary elections or caucuses. These are "pledged" delegates. Other delegates do not — the "unpledged" ones, also known as superdelegates. Ballotpedia reports that about 85 percent of Democratic delegates in the 2016 election are pledged. Some of these are Congressional district delegates, who are allocated to candidates based on primary or caucus results within their districts; the pledged delegates for the Democratic Party are allocated based on statewide results.

The remaining 15 percent of Democratic delegates are unpledged "superdelegates." These are elite members of the Democratic party, such as members of the Democratic National Committee, former presidents, and current congresspeople, who can support whomever they wish at the Convention, regardless of primary or caucus results. Overall, there are 4,763 Democratic delegates, and a candidate must win more than half of them (2,382) to earn the nomination. Superdelegates make up 30 percent of the 2,382 delegates needed to win the nomination. This is particularly important in 2016, because in November, 359 of the 712 superdelegates told the Associated Press that they were already committed to Clinton, as opposed to only eight for Sanders.

The Republican party also has Congressional district delegates pledged to follow the results of the primaries or caucuses, as well as those who are pledged to show support for candidates based on statewide results. While the GOP doesn't have superdelegates, it does have a number of unbound delegates. All 168 Republican National Committee members are automatic delegates, and most of them are unbound. There are a total of 2,472 delegates on the Republican side, according to the official 2016 Republican Nomination Process document. A candidate needs more than half to get the nomination.

It's not so simple with the Republicans. According to the RNC 2016 Presidential Nomination Process document, the party implements proportional allocation in 31 states, but these states can allocate all their delegates to a candidate if he or she get more than 50 percent of the primary or caucus vote. Other states use either a winner-take-all system, in which the candidate with the highest percentage of the vote (not necessarily 50 percent) gets all delegates, or a hybrid of winner-take-all and proportional distribution.

Why Delegates Matter Most

Part of the reason delegates matter so much is that unpledged delegates can vote however they want. The other reason has to do with the number of delegates in each state; since there are far fewer delegates than voters in each state, each voter is not represented on a perfect one-to-one basis. This means that someone could win the popular vote while getting fewer delegates. For example, two states can have the same number of delegates, but their populations can vary by thousands of people. Remember how Al Gore got more votes than George W. Bush in 2000, but lost the election because Bush got more electoral votes? Similar situation.

Finally, on the Republican side, states that can allocate all their delegates to winners may end up with a candidate who has earned the required number of delegates long before late voting states get a chance to vote. The Republican National Convention has mandated that all states voting between March 1 (Super Tuesday) and March 14 implement proportional representation to reduce the likelihood of this happening.

The popular vote is an important measure, but it's not enough to give a sense of how candidates are performing. In order to accurately assess the results of primary elections and caucuses, you need to keep an eye on the delegate count.