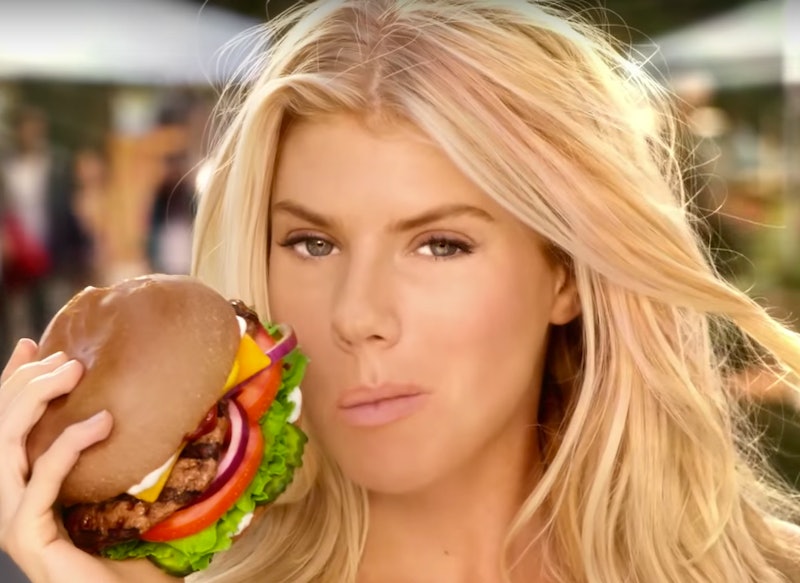 There are few activities more fun than watching outrageous television commercials during the Super Bowl, but sometimes the best commercials are the ones that are intentionally too racy or controversial to even make it to viewers' TVs. If you're curious to know what didn't make the cut, here are 9 commercials banned from the Super Bowl for avoiding the family-friendly route.

Of course, you could view the situation as all your hard work going down the drain. But, on the upside, your brand is saving oodles of cash by not airing that commercial during one of the country's biggest events of the year, and millions of people are likely still going to catch a glimpse of your advert on that glorious creation, YouTube. Where advertisers cross the line with scandalous TV spots is a bit hazy, since plenty of the commercials that have been designated spaces in the "banned for all eternity" vault don't seem all that bad compared to ones that do make it the big game's sponsored breaks. What's less hazy is how flimsy the silliness filter was when producers thought up the plots for these adverts, since pretty much all of them take it to a whole new level of weird.

OK, I really kind of wish this commercial was not banned from airing. Who wouldn't laugh out loud at the sight of (just about) every guy in the vicinity getting a swift hit in his private parts?

I want to say the McKinney commercial isn't any worse than, say, the food chain's breakfast spot with Ronda Rousey. Then you see the guy shaving an ice block as McKinney walks by, who is explaining her love for going au naturale. So maybe not as kosher.

Did anyone else see GoDaddy commercials as a kid and totally think the company was selling something a lot sexier than web domains? Me too. This banned TV spot seems to be the least scandalous of them all, though, so I think Lola and his lingerie brand totes should have aired during the 2010 Super Bowl.

A commercial that makes references to both sex tapes and lap dances? It's too much for my innocent ears to handle. No television time for you, Bud Light.

Another bit about causing some serious pain in the general area of one's private parts — this time from the other side. Commercial producers must think male viewers get some sort of joy out of seeing guys in agony, and that that makes them crave a Bud Light.

Yes, Bud Light's on a roll. You might even think the beer brand was doing it on purpose! Apology-Bot 3000 didn't get too controversial this time, though, other than telling a table of customers that they were screwed. Maybe the folks in charge of censoring just weren't fans of the talking robot.

You can't deny the fact that the constitutional right exists, but you also can't deny the arms manufacturer is taking it a bit too far with a script that says no one has the right to tell a man how to defend his family. That might be because you can't just buy guns and do whatever you want with them.

This PETA plea for going vegetarian is all sorts of strange. Vegetarians have better sex? I'll be happier if I have sexual relations with my broccoli and consequently save all the animals? Where's the research to prove all this?

This commercial definitely wins the most hilariously sick and twisted award.

You wouldn't believe some of the sexist comments female football fans experience. Don't believe us? Watch Bustle's video below.