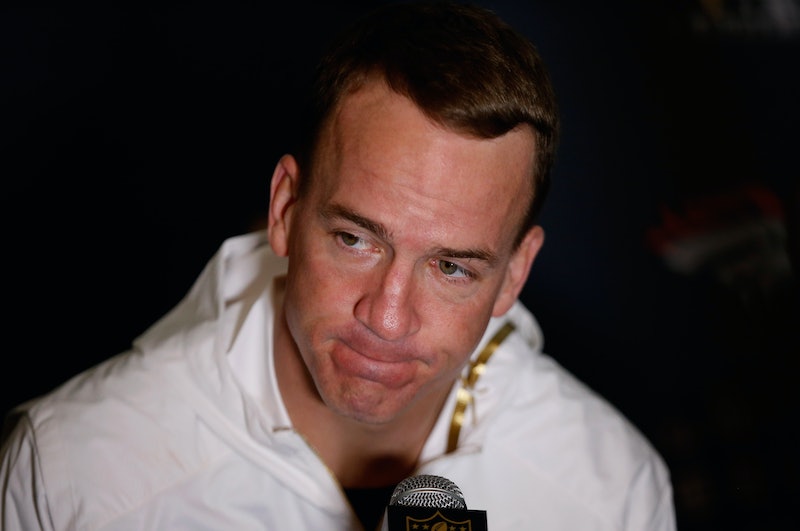 In a league plagued by domestic violence disasters and a growing concern over concussions, the NFL's Peyton Manning has long seemed like a beacon of light. He has a stellar record on the field and a pretty solid one off the field, as well — or, at least, that's what it seemed like until Al Jazeera released a documentary in December that accused Manning of taking prohibited performance-enhancing drugs. Now, Manning is set to play what could be his last professional football game — at the Super Bowl, no less — on Sunday, but the doping accusations will likely still loom overhead.

Al Jazeera journalist Deborah Davies was responsible for the documentary that accused Manning. Called The Dark Side, the film features comments from an Indiana pharmacist named Charlie Sly, who claimed that he delivered human growth hormone (HGH) to Manning's home for a prescription that was in Manning's wife's name. The well-known quarterback lived in Indiana for several years while playing for the Indianapolis Colts. Manning wasn't the only professional athlete accused in the documentary, but he's definitely the one who's gotten the most attention from it — probably because Sly's claims are so hard to believe given Manning's otherwise near-spotless record. (We'll come back to that "near" point.)

Shortly after the documentary was released, Sly announced he was recanting his statements. He told ESPN just days after The Dark Side came out that he made up the stories about Manning and that he isn't even a pharmacist. Davies claims to have another source who confirmed Sly's initial allegations, but that source remains confidential.

Manning himself has called the claims "complete trash" and maintains Sly's stories were "completely fabricated." Speaking at a media event on Monday ahead of Super Bowl 50, in which Manning will play for the Denver Broncos, Manning said, "I know the rules of the NFL and I respect the rules. They're important to me." A spokesperson for Manning has previously confirmed, however, that Manning's wife, Ashley, did receive medication from the clinic named in the documentary.

The NFL has opened an official investigation into the doping allegations — an investigation that the quarterback has welcomed. You certainly won't have an answer by Sunday's big game, though, and it's likely that Manning will retire after this season. He has performed noticeably worse this season than in previous years, and after beating the New England Patriots in the game that decided the Super Bowl contender, Manning even told Patriots head coach Bill Belichick that Sunday's game could be his "last rodeo."

That's not to say the doping allegations are a moot point. Although it seems like most people who know anything about Manning don't believe the accusations, it certainly wouldn't be the first time that Americans were surprised by an athlete with an otherwise remarkable reputation being brought down by a drug-related scandal. To propose a different scenario, if it doesn't bring him down, it wouldn't be the first time that a mark on Manning's record went largely unnoticed or undiscussed. During his college days at the University of Tennessee, Manning was accused of sexually harassing a female trainer. Manning allegedly exposed himself to her without warrant. He wrote in his book years later that he saw the whole situation as "crude, maybe, but harmless," and that the woman who accused him was "vulgar."

Ultimately, it's unclear whether or not Manning used HGH, although his mostly shiny track record would make it easy to assume that he didn't. Either way, it's interesting that these claims have come to light right at what is likely the end of his career. If he does choose to retire, his career could either end on a great note with a Super Bowl win or the unfortunate note of a drug scandal and a loss.