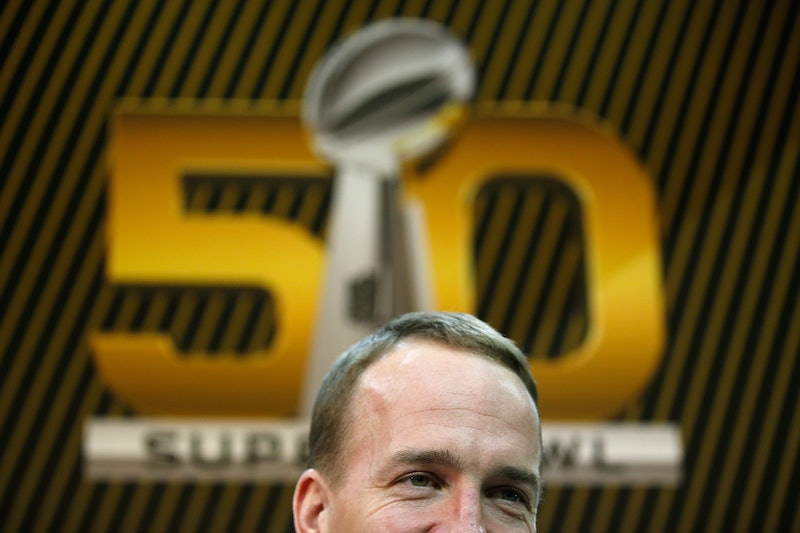 It’s that time of year again. And no, not Christmas. Now that the holiday season has long gone, it’s time for America’s true favorite holiday to shine. In honor of America’s favorite holiday, here are 7 surprising facts about Super Bowl 50 you can pull out during halftime, you know, to impress your friends and all while you're all huddled by the TV.

This Sunday, Super Bowl 50 will return to living rooms across America from the San Francisco Bay Area in a tough match-up between the Carolina Panthers and the Denver Broncos. As the event draws closer, it’s looking to be the biggest one yet, as the folks behind the billion-dollar sporting event celebrate its 50th anniversary in true fashion. The Super Bowl has had its fair share of memorable moments in its long history since the first game was played in 1967, from Janet Jackson's wardrobe malfunction during Super Bowl XXXVIII to those crazy Super Bowl ads that just keep getting weirder. The event has got everyone wondering: Will superstar quarterbacks Peyton Manning or Cam Newton take the lead? Will mega-acts Coldplay, Beyoncé, and Bruno Mars live up to the famous main stage? Only time will tell, but here are some facts for you to enjoy in the meantime:

Security Is At An All-Time High

As Super Bowl 50 draws nearer, officials aren't taking safety lightly and are ramping up security at Levi’s Stadium. And no, I'm not talking about your ordinary police officer on the corner of the block. We’re talking F-15 fighter jets and helicopters, all thanks to the U.S. military. “In the event of an emergency during Super Bowl 50, there will be a significant impact on ground transportation,” U.S. Coast Guard Lt. Neil Penso, a pilot assigned to Air Station San Francisco, told CBS.

Battle Of The Ages

Everyone’s eyes are on the two quarterbacks this year, Manning and Newton. But did you know that the age difference between Manning and Newton is 13 years? That’s the largest in the history of the Super Bowl. So will a 26-year-old Newton or a more seasoned 39-year-old Manning take the cake? They say age is just a number, right?

All Eyes On The Field

There are going to be a whopping 70 cameras used by CBS this year to televise Super Bowl 50. In the first Super Bowl, only 11 cameras were used. So if you’re wondering how you’re getting such good quality close-ups of Manning’s intense expression of concentration during the game — well now you know.

Spend Money, And Then Spend Some More

There’s no surprise the Super Bowl rakes in a whole lot of cash. But did you know the Super Bowl is expected to rake in a whopping $15.5 billion this year? That’s from sales of food, drink, team clothing, and home electronics, according to the National Retail Federation’s Super Bowl Spending Survey. Looks like it’s the Super Bowl’s lucky year — that’s an 8.3 percent jump from last year’s numbers.

It's a win-win situation this year, as it's the first time two quarterbacks who were No.1 choices in the NFL draft are going against each other. Manning was No. 1 back in 1998 from Tennessee and Newton was No. 1 in 2011 from Auburn. We're going to have to see which champ really comes out on top.

The lucky champion of Super Bowl 50 will get a Vince Lombardi Trophy, which was originally named "World Professional Football Championship." Named after the legendary Green Bay Packers coach, the trophy was renamed in 1970 and presented as the Lombardi Trophy for the first time during Super Bowl V.

More like this
The 6 Best Sunglasses For Snow
By Lauren Moison
David Beckham’s Controversial Qatar Deal Skyrocketed His Net Worth
By Catharina Cheung
'Breaking Bad' Duo Walt & Jesse Are Back — In This Super Bowl Commercial
By Jake Viswanath
6 Organizations Fighting Police Brutality That You Can Support Right Now
By Syeda Khaula Saad and JR Thorpe
Get Even More From Bustle — Sign Up For The Newsletter
From hair trends to relationship advice, our daily newsletter has everything you need to sound like a person who’s on TikTok, even if you aren’t.