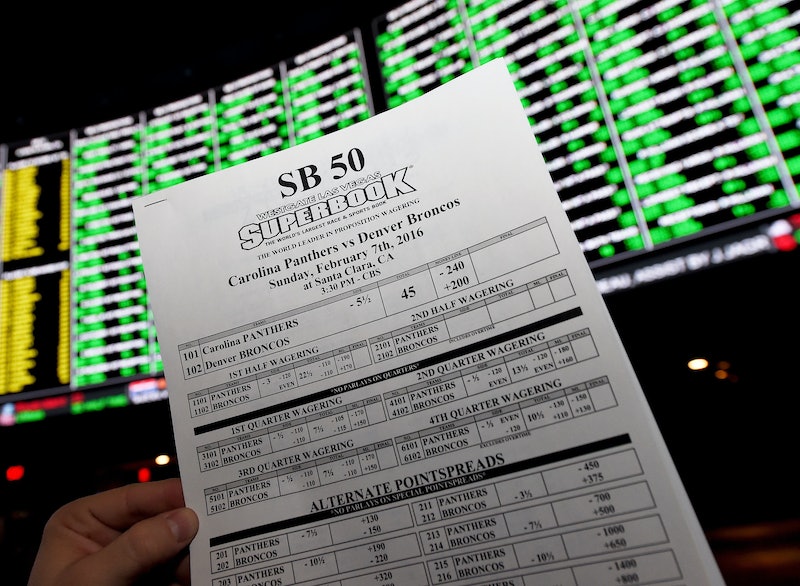 Championship sports games provide those rare moments when you can find friends, family, fans, and non-fans alike sharing in the excitement of a great athletic match-up. In the midst of all this joyfulness (and eating of seven-layer chip dips) also typically emerges the pitting of loved ones against one another, particularly when a bit of cash is on the line. For Sunday's game between the Carolina Panthers and the Denver Broncos in San Francisco, there is quite a bit of opportunity to get in on the wagers. Here are 9 Super Bowl 50 prop bets that require zero knowledge of football.

With so many darned things happening over the span of the several-hour game, the possibilities for wagers — from the number of points scored in the first half to the number of penalties for excessive celebration — are just about endless. And if there was ever a time to know absolutely nothing about a sport, but still take the risk of betting on some aspect of a game, Super Bowl Sunday would be that time. You can be the biggest NFL noob (the kind that's clueless when everyone around you at parties won't stop talking about Cam Newton), and still win a few bucks simply by knowing how much folks love their hot wings on game day or what footwear Beyoncé is partial to wearing.

1. How Many Times Will The Golden Gate Bridge Be Shown During The Broadcast?

We've got an over/under bet for this one, with 0.5 being the golden number — pun intended. OK, but what happens if the cameramen figure out a way to actually show the bridge only half a time?

2. How Many Wings Will Buffalo Wild Wings Sell On Super Bowl Day?

This is another over/under bet, with 12 million wings being the threshold. I feel like there are more than a few football fans who would be willing to ensure that number goes over by placing three or four extra orders of hot wings.

3. Will There Be An Earthquake During The Game?

The odds: 10 to 1 that one will happen. Important to note is that an announcer actually has to indicate during the live broadcast that a quake did occur or else the payout won't happen.

4. Will Peyton Manning Be Seen Crying At Any Point During The Entire Broadcast?

The odds: 6 to 1 that tears will be shed and 1 to 12 that it will be a dry night. If John Boehner were scheduled to attend the big game, I have a feeling the odds would be even higher that the former speaker of the House wouldn't be able to hold back the tears.

5. Which Song Will Coldplay Play First During The Halftime Show?

The possible winners with the highest odds include the band's latest "Adventure of a Lifetime," "A Sky Full of Stars," and "Viva la Vida." Why is there no prop bet on whether the musical group will have matching outfits, like the ones they wore for months following Viva la Vida's release?

6. If Steph Curry Is Shown On TV During The Broadcast What Will He Be Wearing?

The Golden State Warriors player made the announcement Monday on The Dan Patrick Show that he would be wearing a custom Under Armour Tee with a graphic of Curry himself pounding the Panthers' "Keep Pounding" drum. So cat's out of the bag on that one.

7. Will "Left Shark" Make An Appearance On Stage During The Super Bowl Halftime Show?

Yes, America is hoping for an encore by the Katy Perry backup dancer from Super Bowl 49 that taught everyone there's nothing better than marching to the beat of your own drum. The odds: 15 to 1 that Lefty will show up.

8. What Color Will Beyoncé's Footwear Be When She Comes On Stage For The Halftime Show?

I'm willing to just be honest with everyone here and say that this is clearly the most important aspect of the entire Super Bowl 50 extravaganza. Why worry about points scored when Queen Bey will be in the house, and she'll be wearing shoes. The official odds are favoring black or gold/brown.

9. What Color Will The Liquid Be That Is Poured On The Winning Coach?

The options include every color of the rainbow as well as, of course, clear for water. Orange is the clear frontrunner, but blue, yellow, and clear appear to be smart bets, too.