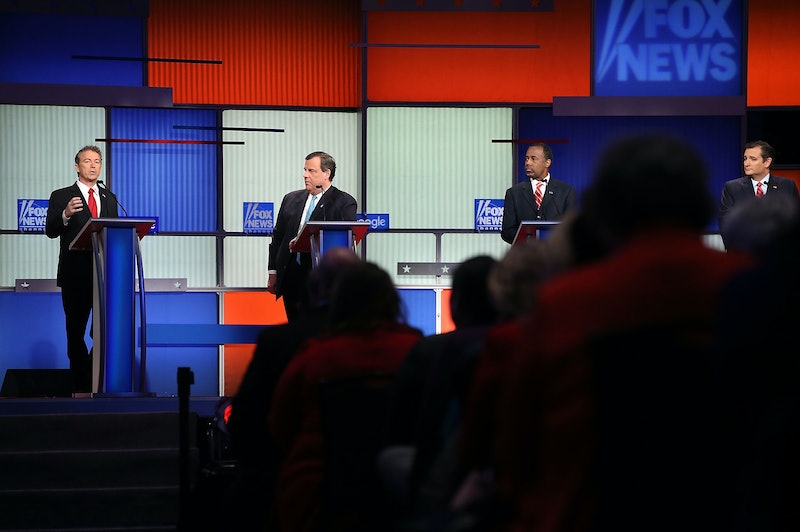 Campaign season is undoubtedly heating up. The next Republican presidential debate is coming in the heat of the last spectacle, in which we missed Donald Trump's antics as he instead held his own rally in Des Moines. This Saturday, in Manchester, New Hampshire, the GOP debate will be underway as presidential hopefuls once again face-off in the event moderated by David Muir and Martha Raddatz with WMUR Political Director Josh McElveen joining in, airing on ABC at 8PM ET. If you can't make it to the TV this time around to catch the debate, not to fret — you can watch the ABC GOP debate on the ABCNews.com live stream, and you definitely won't want to miss this one.

For starters, Trump says he'll be back in the game and won't be skipping out like he did last week for the Fox News debate. "I think I will be, yeah," Trump said to NH1 News when asked whether or not he'll attend. "I look forward to it." Who wouldn't want to miss more Trump shenanigans, from his birther attacks on Ted Cruz's eligibility for presidency to confronting South Carolina Gov. Nikki Haley that he's "very angry."

t's the final debate before the New Hampshire caucuses on Monday. So what's in store for this time's debate? ABC is getting down to business for the eighth GOP debate, announcing that there will be no undercard debate for candidates who rank lower on the polls.

This unique twist means no more time for child's play; the new criteria could potentially leave out half the GOP field. Candidates better make sure they were ranked top three in the Iowa caucuses or place in the top six based on New Hampshire or national polls, or else they'll risk facing the chopping block this Saturday. Based on the new criteria, candidates Rand Paul, Carly Fiorina, Rick Santorum, and Mick Huckabee most likely won't be seeing any screen time.

The New Hampshire GOP debate is seriously important because it could be the last shot for Jeb Bush and Chris Christie to make a name for themselves. In Iowa, they both only got 5 percent, although they invested money and time there. Both candidates are once again making bringing their A-game and making a hard push in New Hampshire, with Christie challenging Marco Rubio, who did better than expected in the Iowa caucuses. Whatever drama unfurls on Saturday night, it's going to be an entertaining one, so sit back and enjoy the show.

More like this
Watch Jacinda Arden’s Devastatingly Honest Resignation Speech
By Sam Ramsden
Eurovision Has Been Given A Whole New Look Ahead Of Its Liverpool Debut
By Bustle UK
Man Meets Politics: ‘Boy Meets World’ Star Ben Savage Is Running For Congress
By Jake Viswanath
Pret & Costa’s Coffee Is The Strongest On The High Street, According To Which?
By Sam Ramsden
Get Even More From Bustle — Sign Up For The Newsletter
From hair trends to relationship advice, our daily newsletter has everything you need to sound like a person who’s on TikTok, even if you aren’t.