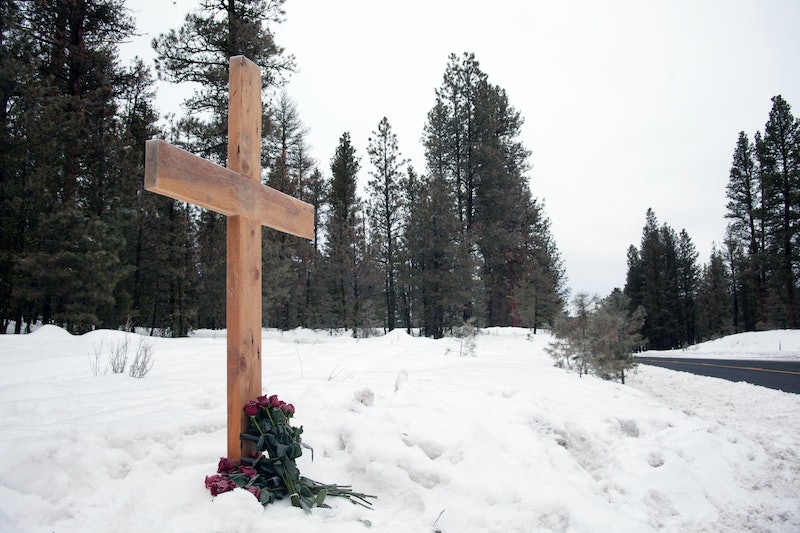 Video of the death of armed Oregon refuge occupier Robert "LaVoy" Finicum has his family raising questions about the incident. He was shot by the FBI and Oregon State Police after trying to escape from a traffic stop last week in which the leaders of the right-wing, anti-government protest group were arrested. The Finicum family — upon further review of the FBI video shot from a helicopter above the scene — released a second statement Tuesday. They called the shooting unjustified, even going so far as to accuse the authorities of a cover-up.

The statement, released through the family's lawyer, said that their new claims are also bolstered by the account of Shawna Cox. She was riding in Finicum's vehicle and was released from police custody last week. After reviewing the video with Cox and another passenger, Victoria Sharp, the family claims that Finicum was fired on before he left his truck.

He exited very quickly and ran away from the vehicle to draw the gunfire away from the truck and its remaining occupants. He had his empty hands in the air. He never wielded a weapon. He never posed any genuine threat to anyone. It is our position that he was cornered like a helpless animal, with nowhere else to turn, and executed in cold blood.

The statement goes on to claim that they believe he was shot before lowering his hands, and that his movements were likely a natural reaction to the bullet. They also took issue with the delay in providing medical attention at the scene. According to Reuters, the FBI has declined to comment on the Finicum family's allegations, but authorities have maintained that the shooting was warranted by the occupier's actions toward police.

The video shows the truck stopped on the rural highway after being pulled over with police vehicles behind it. One man gets out. It stays put for about 3 minutes and 45 seconds before the truck takes off again. Driving at high speeds, the truck comes upon a road block of three police trucks. According to the video, Finicum tries to go around to the left, through the snow, but becomes stuck in a snowdrift. He nearly hits an officer as he tries to swerve around the road block.

This is where authorities' version and the one put forward by the Finicum family diverge. In the video, you can see him getting out from the truck almost immediately after hitting the snow bank. He has his hands up. Then, police say as Finicum walked away from the truck, he went to put his hand in his pocket. At this point, an Oregon trooper, who was in the woods away from the road, shoots him from behind.

Greg Bretzing, the FBI's special agent in charge of Oregon, said Finicum reached for a gun. "On at least two occasions, Finicum reaches his right hand toward a pocket on the left inside portion of his jacket. He did have a loaded 9-millimeter semiautomatic handgun in that pocket," he said at a news conference.

Finicum's death happened as the police were trying to arrest leaders of the right-wing, anti-government group that had been involved in an armed standoff with federal authorities for nearly four weeks at the Malheur National Wildlife Refuge. They called themselves the Citizens for Constitutional Freedom and were widely criticized, deemed domestic terrorists by some. The day Finicum was killed, eight others were arrested. Their leader, Ammon Bundy, then called on the remaining occupiers to go home.

The Finicum family had an autopsy done over the weekend. They have not released the details. Meanwhile. they have called on the FBI to release all audio and video recordings from the incident, including an audio recording taken inside the truck as well as all unedited dash cams, body cameras, and drone footage.

Whether they will comply remains to be seen. Releasing the initial video, according to The New York Times, was an extraordinary measure.

"There are various versions of what occurred during this event: most inaccurate, some inflammatory," Bretzing said at a news conference. "To that end, we want to do what we can to lay out an honest and unfiltered view of what happened and how it happened."