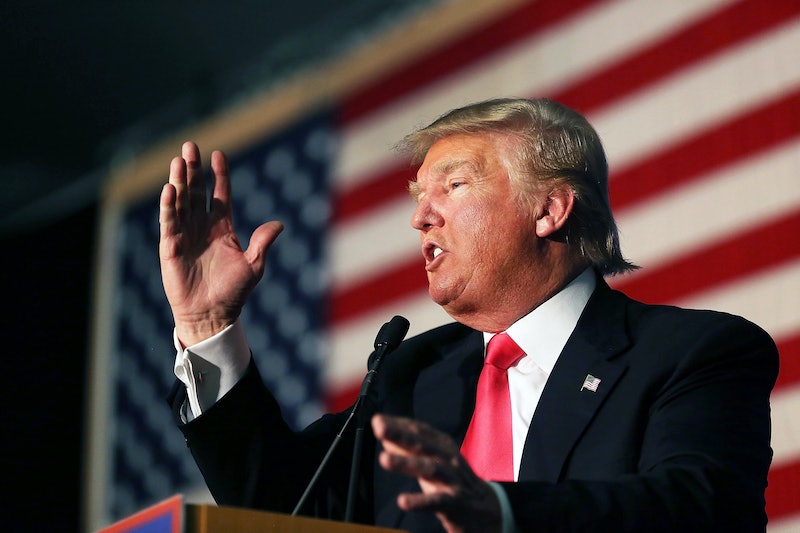 After falling to second in Iowa, Donald Trump launched a fresh political attack on the new GOP frontrunner, Ted Cruz, via Twitter Wednesday morning. The former leader of the Republican presidential pack went so far as to call for the Iowa caucus results to be "nullified" because Cruz "stole" his win. Trump claimed via Twitter that Cruz led a dirty political campaign in Iowa and violated voting laws. "Based on the fraud committed by Senator Ted Cruz during the Iowa Caucus, either a new election should take place or Cruz results nullified," Trump tweeted in conclusion of his Twitter blast, which included specific allegations that Cruz's team spread lies about him and Ben Carson.

Trump tweeted that Cruz's campaign had propagated false information about his supposed support for ObamaCare, which he tweeted, in typical Trump fashion, was a "total lie." He also lashed out at the Cruz campaign for reportedly deceiving Iowa voters into thinking that Carson would be dropping out of Republican race to sway them into supporting the Texas senator.

The Cruz campaign's tactics to woo Carson supporters in Iowa have come under increasing scrutiny. It was widely reported that some of Cruz's staffers went to caucus sites and told Iowa Republican voters that Carson was quitting, enraging the latter candidate's team. "To have campaigns come out and send emails to their caucus speakers suggesting that Dr. Carson was doing anything but moving forward after tonight is the lowest of low in American politics," Carson's campaign manager, Ed Brookover, told Time.

The reports of the dirty tactics have received so much credence that Cruz even formally apologized in a statement to CNN on Tuesday, though in a sorry-not-sorry style.

Last night when our political team saw the CNN post saying that Dr. Carson was not carrying on to New Hampshire and South Carolina, our campaign updated grassroots leaders just as we would with any breaking news story. ... That's fair game. What the team then should have done was send around the follow-up statement from the Carson campaign clarifying that he was indeed staying in the race when that came out.