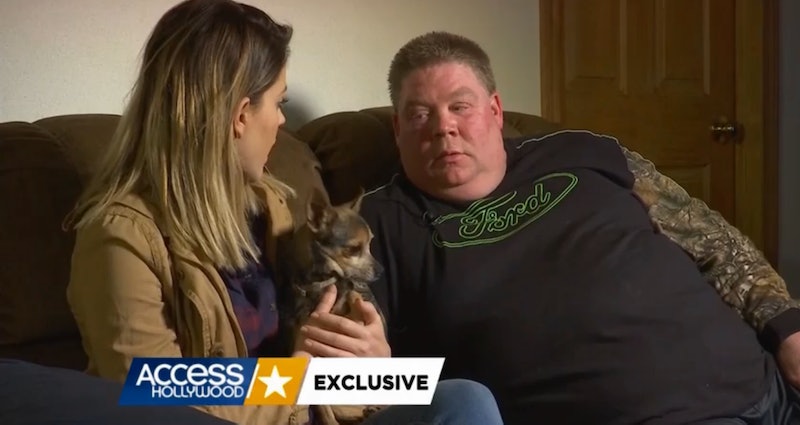 For the past month and a half since Making a Murderer premiered on Netflix, key players in the Steven Avery case have been speaking up to share their insights, adding new, never-before-considered facets to the docuseries' portrayal of the murder case. Keeping the updates coming, Steven Avery's younger brother Earl shared his side of the story as well as what he knows about the murder case that landed Steven in prison for life. In an interview with Access Hollywood's Stephanie Bauer, Earl expressed why he believes the pieces of evidence don't fit together.

If someone's going to slice somebody's throat, you know there's going to be blood... something. And they say they cleaned up in the garage but there's all dust and everything all over everything. How do you clean up and then put the dust back?

Access Hollywood accompanied the Avery family to their isolated fishing cabin, where they tuned into two specials that had aired that weekend on Steven. NBC's Dateline episode titled "The State of Wisconsin vs. Steven A. Avery" aired on Friday, followed by a segment on Keith Morrison's Front Page called "Steven Avery: Innocent or Guilty?"

According to the interview, Earl and Steven haven't seen each other in a decade and haven't spoken in the last eight years. That all changed this past January when they reportedly reunited over the phone. Prior to the conversation, tensions had arisen after a 2009 court filing surfaced. In 2009, Avery alleged that, based on their criminal records, his brothers Earl and Charles may have been involved in the murder of photographer Teresa Halbach. The 2009 document also implicated Scott Tadych, the boyfriend of Brendan Dassey's mother, and Bobby Dassey, Brendan Dassey's brother.

Avery's defense attorneys unsuccessfully attempted to turn Earl into a main suspect by pointing out that he had allegedly sexually assaulted his two daughters in 1995. Earl, who chose to speak to his brother anyway even after the documents became known to the public, said he and his brother made amends after Steven claimed he lied because his attorneys advised him to do so.

Earl said he doesn't hold a grudge against his brother. Instead, he shared his own insight on the case, hoping to contribute evidence that would help prove Avery's alleged innocence. He said that late on the night of Oct. 31, 2005, he drove right past the spot where Halbach's car was allegedly parked. He claimed that the Toyota RAV4 "wasn't there." When asked whether or not he shared this information before, he responded affirmatively and said the Manitowoc Sheriff's Department didn't say much on the matter. He hopes that in the instance that Avery is granted a retrial, it will be hosted by a different county.

Because everyone in Manitowoc County, half of them, are against us.

According to Earl, the case has affected his entire family. Earl explained that after Steven tried to implicate him in the murder of Halbach, he's been unable to find jobs. Avery's father, Allan, also contributed to the interview, comparing Steven to a rabbit that's locked up in a cage in an attempt to illustrate his son's fragile mental state in prison.

More like this
Where Is Armie Hammer’s Ex-Wife Elizabeth Chambers Now After 'House Of Hammer'?
By Grace Wehniainen and Radhika Menon
Victoria Beckham Loves Teasing David About His “Sticky” New Hobby
By Sam Ramsden
Jeffrey Dahmer’s Arresting Officer John Balcerzak Got His Job Back After Being Fired
By Grace Wehniainen
Gabby Petito’s Family Responded To The New Lifetime Movie About Her Final Days
By Grace Wehniainen
Get Even More From Bustle — Sign Up For The Newsletter