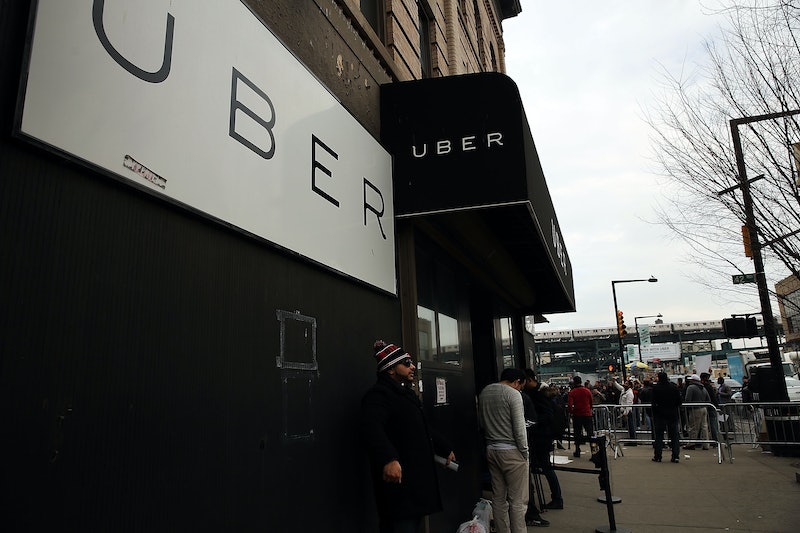 You might have noticed a weird looking app on your smartphone in the past day, in the exact same spot the familiar Uber "U" used to be. The ride-sharing company launched a major redesign of the app on Monday, featuring a futuristic new logo that's making serious waves on social media. The newly redesigned Uber app is a big shakeup, and the reaction so far has been extremely mixed.

The most jarring change about the app is the logo. The company had previously changed its logo only once in 2011 when the service started expanding throughout the United States. Since then, Uber has reached over 8 million users in over 60 countries. Millions of people became familiar with Uber's sleek "U" logo — for many, it was a symbol of reliability and excellent customer service. Now, the redesigned logo is radically different, and features an asymmetrical open circle with a networking-inspired pattern in the background. Also, as Gizmodo points out, when the logo is rotated 90 degrees, it kinda looks like a certain body part.

The interface of the app has changed much less significantly for most users. The typeface for the company has "matured" and "reflects a more substantial look," but really, the change is hardly noticeable. Other than that, the interior of the app has retained its familiar design, at least for U.S. users so far.

Users in other countries may have noticed a much more dramatic change, however. In the official announcement, the company displayed new, bright color palettes for certain countries, including Mexico, Ireland, China, and India. These new color schemes were created to reflect the unique aspects of each country, and Uber is promising to add more soon, including unique designs for certain cities.

Yet people are very torn about the redesign. The new aesthetic has been a topic of intense conversation on social media, and while some appreciate the new branding and company logo, others find the new marketing strategy complex and unnecessary. "Dear Uber: your old logo was very bad but useful. Your new logo is very bad and useless. Yours truly, Everyone," tweeted Joshua Topolsky, co-founder of Vox Media. Another commenter tweeted, "Really digging @Uber's new branding, primarily the individualism they're attempting to bring to each area."

Whether people love it or hate it, the app redesign happened at a good time for the company. Uber has faced some serious PR scandals in recent months. The company is facing growing losses and disputes about the legality of its service in multiple markets worldwide. The app redesign gets customers and investors talking about something new and revives the company's reputation for innovation.