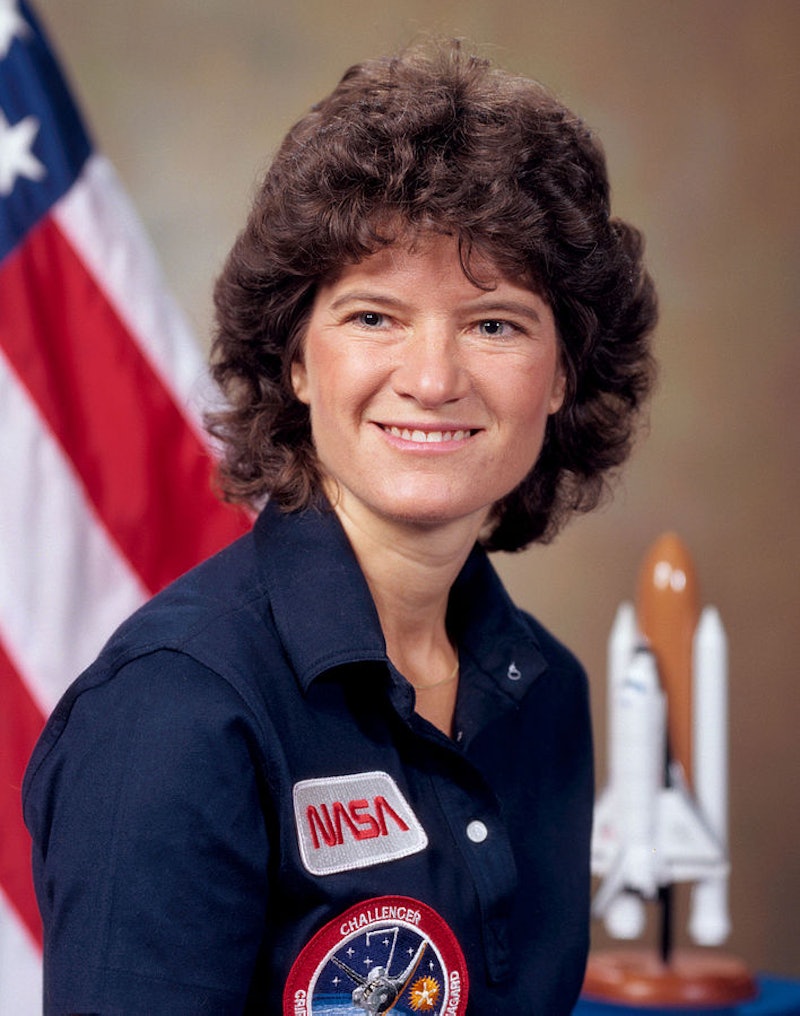 There's a special breed of magic that occurs when you put two pioneering women in the same room for a conversation — especially, as is evidenced during a recently re-discovered recording from 1983, when that conversation involves Sally Ride talking to Gloria Steinem. In the latest episode of the lost interview series, "Blank on Blank," this blast from the past was given new life... and listening to Ride, who was the first American woman in space, open up to iconic feminist and writer Steinem is giving us life, too.

Although women in space is no longer necessarily considered a rarity (hurrah for progress), that certainly wasn't the case when Ride made her first trip into orbit. In 1983, she was part of an elite group whose path had been blazed in 1963 by Soviet cosmonaut Valentina Tereshkova. Since that time, 57 of the 534 people who have traveled to space have been women, according to space history and artifacts expert Robert Pearlman. But while much has changed in the three decades since Ride made history, her unearthed interview with Steinem as part of Steinem's then-ABC series In Conversation With (side note: Can we make this be a thing again? Because it's the best) highlights the fact that some things sadly haven't changed.

Here are a few of the truths Ride revealed which should really resonate — listen to the full interview after the jump.

To see or know of someone who looks like you doing something is a powerful thing. It gives you something to aspire to — hope that you could one day follow in their path. But for Ride, being a female in the astrophysics field was not something that was considered normal. "I went to a girls' school that really didn't have a strong science program at all when I was there," she said. "At the time, it was a classic school for girls with a good tennis team and a good English teacher, and essentially no math past eleventh grade and no physics and and no chemistry."

There are a million questions to ask a woman going into space, and none of them include hair, makeup or the likes. However, Ride confirms, she was on the receiving end of sexist questions "just about every interview." In addition to being grilled about the female bathroom facilities on board, "everybody wanted to know about what kind of makeup I was taking up," Ride said. "They didn't care about how well-prepared I was to operate the ARM or to deploy communication satellites." The things she was concerned about were not the things the press was concerned about. "Without a doubt, I think that the worst question I have gotten was whether I cried when we got malfunctions in the simulator."

While the press certainly should give due attention to something as groundbreaking as the first American woman in space, Ride says the press was annoyingly dogged in its attempt to create headlines out of her unique experience. At the height of her career, for example, a rumor persisted that claimed Ride was asked about wearing a bra in space (because that's such a pertinent thing to ask a female astronaut). Her alleged response was something along the lines of, "With the weightlessness, what does it matter?" In reality, this never happened, said Ride: "I never got that question."

4. The enormity of space travel is gender neutral

As Steinem described being on the ground and watching grown men cry during the shuttle launch, Ride shares that the experience was equalizing in many ways, saying, "The moment of launch — when the engines ignited and the solid rockets lit — everyone on the crew was, for a few seconds, just overcome with what was about to happen with us." However, that doesn't mean Ride wouldn't have enjoyed a little like-minded company. "I wish that there had been another woman on my flight," she told Steinem. "I wish that two of us had gone up together. I think it would have been a lot easier."