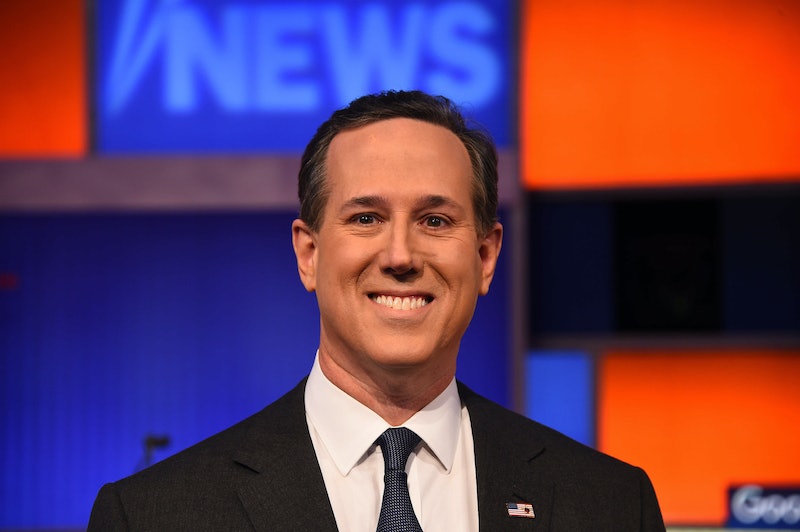 CNN reported Wednesday afternoon Rick Santorum has dropped out of the presidential race. The announcement came just hours after Rand Paul also announced the end of his campaign, and only a couple days after the Iowa caucuses, where Mike Huckabee kicked off this domino effect by announcing he'd drop out before the results were even finalized. Santorum confirmed the announcement on Twitter Wednesday evening and threw his support behind former competitor Marco Rubio.

Santorum has been lagging behind in the polls for a while now, often being relegated to the undercard debates for not meeting the percentage requirement to make it to the primetime stage. In the Iowa caucuses, he got just 1 percent of votes, only beating out "Other" and Jim Gilmore, so the suspension of his campaign wasn't too much of a surprise. In fact, there were even signs that it was coming: According to Schuyler Kropf, a Post & Courier reporter, Santorum canceled his tour of 46 South Carolina counties that was set to begin Wednesday.

What might have been most surprising about Santorum's dismal showing in the 2016 race was that he was such a frontrunner in 2012. His showing in Iowa during the last presidential election was astonishing — winning the caucuses with 24.6 percent of the vote (which is more than Donald Trump earned in Iowa this year). But he ultimately lost the nomination to Mitt Romney, who went on to lose the general election.

For now, the Republicans have nine candidates in the running, compared to the 17 they started out with. The Democrats are down to just two — Hillary Clinton and Bernie Sanders — after Martin O'Malley decided to suspend his campaign during the Iowa caucuses.

It probably won't be long before we see more Republicans ending their bids for the presidency. With such a bloated field to begin with, along with Santorum, Paul, and Huckabee, we've also previously seen Lindsey Graham, Bobby Jindal, George Pataki, Rick Perry, and Scott Walker drop out. It would be not at all shocking to see Jim Gilmore, John Kasich, Chris Christie, and Carly Fiorina — who all earned less than 2 percent in the Iowa caucuses — think about suspending their campaigns as well.