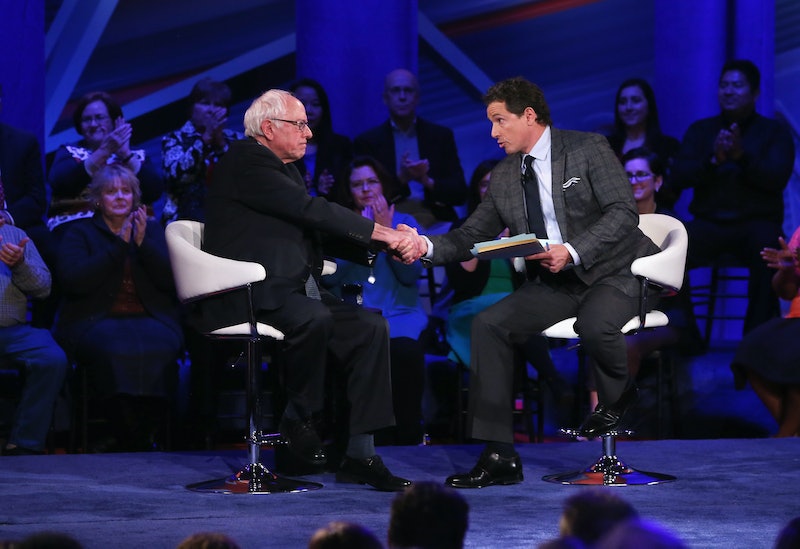 On Wednesday, Sen. Bernie Sanders and Hillary Clinton will attend a town hall moderated by CNN's Anderson Cooper. Taking place just six days before the New Hampshire primary election, the event will give the candidates an additional opportunity to reach out to Granite State voters. After Clinton's very narrow victory in Iowa Monday, both candidates have a lot at stake in New Hampshire. That's why you should know how to watch the Democratic town hall, which will begin at 9 p.m. ET. Those with a television can tune in on CNN, and others can live stream the event for free at CNNGo.

Unlike debates, in which candidates go back and forth responding to moderators and one another, the town hall format will allow the candidates to sit down with the moderator at length, answering questions both from Cooper and from New Hampshire voters in attendance. Since Gov. Martin O'Malley has thrown in the towel, the spotlight will be reserved for just Clinton and Sanders.

Recent polls show Sanders with an average 17.5 percent lead over Clinton in New Hampshire. Clinton won the Iowa caucuses by a 0.29 percent margin. Since she just barely won that contest, it will be important for her to close the gap as much as possible in New Hampshire; Sanders' surprising performance in Iowa may have shaken the sense that Clinton is the inevitable nominee, and a landslide victory for Sanders in the first primary of the nation could shake it further.

One way both candidates may try to achieve their respective goals is to appeal to the interests of New Hampshire's undecided voters, some of whom they will be taking questions from tonight. A recent WBUR poll found that, of the undeclared (or "independent") who make up 44 percent of New Hampshire's voters, one-third have not yet decided whom they will be voting for in the primary. Among the undeclared and undecided, 42 percent skew Democratic (compared to 31 percent Republican). The WBUR poll found that "Defeating ISIS" and "Improving the economy" were the top two priorities among this group, with "Addressing income inequality" coming in third.

With this in mind, Sanders' typical focus on economic gains for the lower and middle classes could play out well. Speaking about his foreign policy proposals might also be important for keeping a big lead margin in New Hampshire, given the concern about ISIS expressed by undecided independents, as well as the common criticism from Clinton's campaign that he doesn't have enough experience in foreign policy. Sanders may also gain from pointing out what he perceives as Clinton's past mistakes, including her initial support for the Iraq War.

Another crucial thing for Sanders to address, both in New Hampshire and going forward in the race, is the Clinton campaign's frequent refrain that Sanders' proposals are unrealistic and couldn't be implemented. This criticism could prove powerful against a candidate proposing fundamental changes to healthcare, the economy, campaign finance, and more.

Clinton could woo undecided independents in New Hampshire by playing up her experience as Secretary of State and her plan for ISIS, which is more aggressive than Sanders', as it involves a no-fly zone in Syria. As far as economic reform and income inequality, Clinton may do well to respond to Sanders' frequent criticism in recent debates about her history with Wall Street and wealthy corporations by owning up to these relationships and convincing voters that she's willing to break them if necessary for the good of the majority.

Though New Hampshire has only 32 Democratic delegates to allocate (a candidate needs 2,382 delegates to become the nominee), as the second official contest in the race, it can influence the tone for both campaigns going forward. That influence is especially important after the nail-biter in Iowa.