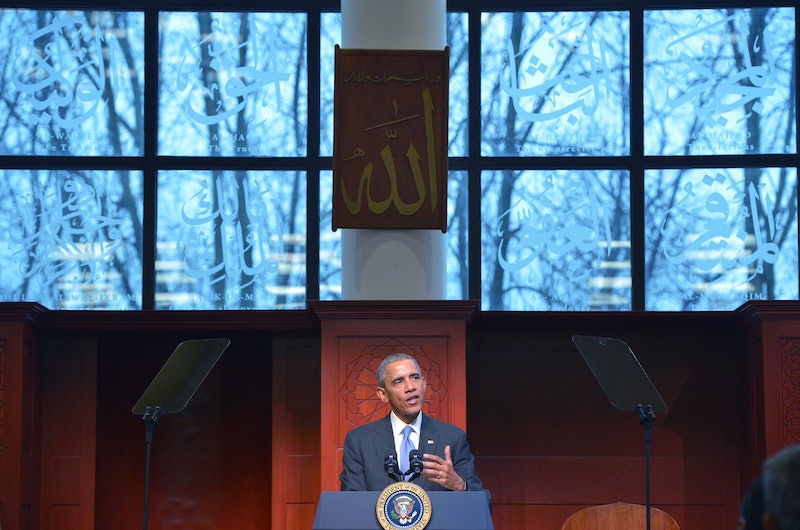 President Obama once again made history Wednesday with a groundbreaking trip to a mosque within the United States, becoming only the third president to ever visit such a site, after Dwight D. Eisenhower and George W. Bush. As part of his ongoing campaign to combat Islamophobia throughout the country, the president made the hour-long drive from the White House up to the Islamic Society of Baltimore, one of the largest Muslim community centers in the mid-Atlantic region. During the visit, President Obama gave a powerful speech about Islam, focusing on the need to combat Islamophobia in America and radical Islamic terrorism. But the most impactful quote from the speech was directly addressed to those within the Muslim community.

You are not Muslim or American. You are Muslim AND American.

This single sentence is the perfect description of the discrimination Muslims face in America because it's something no one would ever have to remind a Christian. Despite the promise of freedom of religion and separation of church and state that the United States was built on, Muslims are overwhelmingly discriminated against because of their religion. For so long, the nation as a whole has been so aligned with Christianity that other religions were feared and categorized as "other." Islam is one of the fastest growing religions in the United States, and Muslims have just as much right to be included and celebrated in all aspects of American society. The message coming from the nation's president is a strong symbol of support to the Muslim community.

But the quote does more than just address Muslims in America — it's also a message to all multi-cultural people who feel marginalized because of their religious, ethnic, or racial identity. People can have a plurality of identities, and the greatest thing about this country is that we are supposed to be able to express those identities without fear of judgment or harm. Especially this year, when so much hateful rhetoric about race and ethnicity has been spewed in the political area (I'm looking at you, Donald Trump), it's incredibly encouraging to all people of discriminated identities to hear this message of support, inclusion, and belonging.

President Obama's commitment to solidarity is so inspiring, especially considering his own experience with Islamophobia. Since the birther movement during Obama's first election in 2008, there has been rampant, hateful speculation that the president is actually a Muslim and is hiding his true religion from the rest of the world. Despite the fact that Obama has spoken openly about his Christian faith and regularly attends Christian church services with his family, the discriminatory, hateful rumors have persisted as attempts to somehow discredit the president.

A lesser leader would have distanced himself from the Muslim community as much as possible to offset these allegations, but Obama has consistently encouraged tolerance and acceptance for the Muslim community, and this historic visit to the Islamic Society of Baltimore was just the latest example of his commitment to a more diverse and tolerant nation.