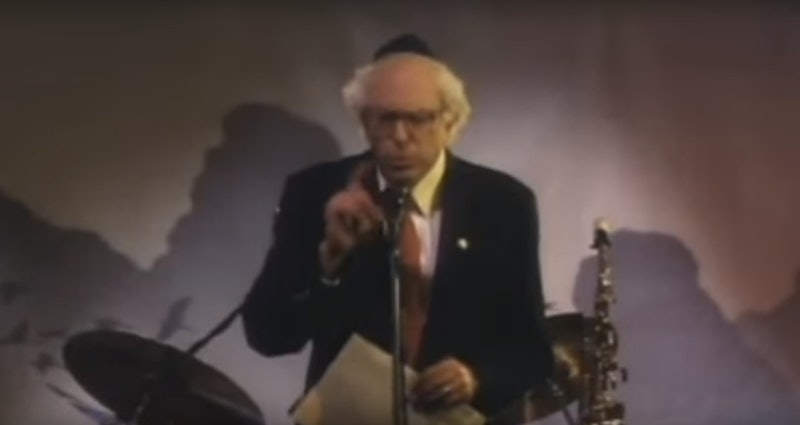 If there's one persistent attack leveled at Vermont senator and presidential candidate Bernie Sanders, it's that he doesn't quite have that zip or zest. You know, that invigorating, soaring rhetoric paired with a wry sense of humor and timing ― the kind of charismatic package that helped Barack Obama defeat Hillary Clinton back in 2008. But if you've bought into this, you're so, so wrong. Bernie Sanders once played a rabbi in a romantic comedy, and it's actually pretty hilarious.

If you've watched and enjoyed Curb Your Enthusiasm star Larry David's imitation of Sanders on SNL, this video might induce a big, exaggerated double take. As it turns out, Sanders came damn close to doing a Larry David impression in his own right back when he was a little younger and a lot more anonymous.

The scene in question, which was freshly highlighted by BuzzFeed's Andrew Kaczynski and Megan Apper last year, is from 1999's My X-Girlfriend's Wedding Reception, a low-budget comedy that could someday be remembered for having the weirdest cameo by a future president ever. It's not terribly important to know the plot of the film, beyond the immediate context that Sanders is speaking at a Jewish-Italian wedding, and his character is something of a baseball fan. Just watch him work with this awkward, rambling brand of comedy ― his character is named Rabbi Manny Shevitz, naturally.

For those of you who can't watch the clip (or are peculiarly into reading transcribed comedic monologues rather than watching someone actually perform them), here's what Sanders says:

My name is Rabbi Manny Shevitz, and I am very pleased that you invited me to be with you today, and I've prepared a few words for this important occasion. Today, we celebrate life. A very sacred part of life. I remember when I used to walk down my old neighborhood in Brooklyn. That was before the Dodgers went to Los Angeles ― which was the worst thing, the worst thing that ever happened, and I don't know why we let them do that.

I mean, nowadays there is no pride. You don't know who owns what team, you don't know who's playing for what. Today they're here one day and they're gone the next day. It's a terrible thing. I remember when the Dodgers played the Yankees, and you bought a ticket, that ticket was good for ten years. Now you go to the stadium, and you look out at the field, you see the Red Sox, you see the Orioles, you see the Cleveland Indians, you see everything. But you don't see the Yankees versus the Red Sox.

OK, I'm getting a little bit off the track here, but let me not take any more of your time. Just one quick thought― oh, by the way, that free agency. Free agency crap. That really gets me. There's two million dollars here, they spend 12 million dollars there. What's so free about that free agency? I can't take that anymore. OK, let me just make my point here. And that is: All in all, it's not so bad. When it's good, it's good. If it doesn't feel right, just say no. There's always tomorrow. There's always tomorrow. It could be worse. Now, let's just thank God you have your arms, you have your legs. Let's eat!

It's a particularly delicious twist that his character is a strident opponent of free agency in baseball. Sanders is one of the most pro-labor, pro-union politicians in America, and the right to sign a contract with any team was one of the hardest-fought battles between baseball ownership and the Major League Baseball Players Union (MLBPA).

For what it's worth, Sanders' character has a point when he complains that the Dodgers abandoned his home borough of Brooklyn. While the real man's exact affinity for baseball is unclear, he was indeed born and raised in Brooklyn, and was a teenager when the team bolted for Los Angeles in 1958.

But more to the point: He does a pretty good job, right? I for one would not have expected that Sanders had such wry, self-aware comedic chops. And even if you didn't find the cameo all that funny, you at least have to give him this much: He's still a better actor than Ronald Reagan was.