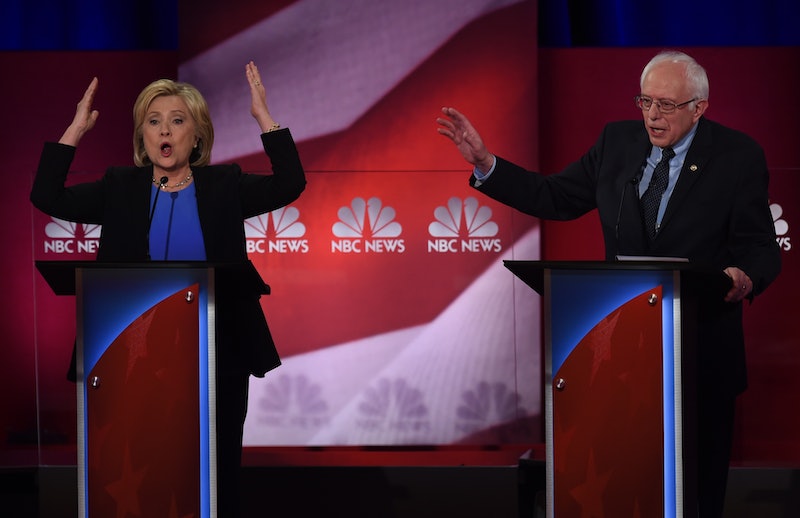 On Thursday night, you're in for a rare (and up until recently, entirely unexpected) treat. Hillary Clinton and Bernie Sanders have agreed to participate in an additional primary debate in New Hampshire, as part of a deal struck between their campaigns to expand the oft-criticized debate schedule. This will be the first time Sanders and Clinton will face off one-on-one, with no Jim Webb, Lincoln Chafee, or Martin O'Malley to mix things up. That is a big reason Sanders and Clinton's debate will be intriguing on a level that even the debates between the eventual nominees might not be. This is where the heart and soul of the Democratic Party gets decided, and that could have implications long past 2016.

Basically, by the time we get around to the full-fledged presidential debates in the summer and fall, many of the deepest, most burning questions about the race will already have been answered. Will Hillary Clinton outlast Bernie Sanders? Will Bernie pull off an incredible upset bid, just like the Obama campaign did eight years ago? And, of course, might we finally see a woman seize the nomination, and have a serious shot at the presidency? Or, for that matter, will we have a socialist and a non-Christian (Sanders is the first non-Christian to ever win presidential delegates) get that chance?

At that point, the fight will be about turning out voters and making broad-based, crowd-pleasing appeals to a general electorate ― the sort of mid-election pivot that former Mitt Romney spokesperson Eric Fehrnstrom disastrously likened to shaking an Etch-a-Sketch in 2012. But right now, everything is still charged with a dizzying, exciting sense of possibility.

No matter how you slice it, there's history on the line for the Democrats, and it's now come down to a binary choice that could shape the future of the party in dramatic ways. A Clinton win would mean a return to the Democratic establishment, which back in 2008 was a fraternity that Barack Obama couldn't really lay claim to. He certainly fits the description of "the establishment" now, as any two-term president would, but his victory over Clinton in 2008 represented a break from those norms.

But it's actually a thicker choice now than it was back then. The dividing lines between Sanders and Clinton are even more stark than they were between Clinton and Obama, and Clinton hasn't been able to get to his left as capably. Back in 2008, she actually ran to Obama's left on health care, excoriating the then-senator for criticizing her universal health coverage proposals (specifically the individual mandate, which Obama would later embrace as part of the Affordable Care Act).

In the current climate, however, there's really no avenue for Clinton to charge to the left, outside of Sanders' controversial, peculiarly conservative record on guns. But increasingly, it's looking like she's going to have to try, which is why Thursday night's debate could generate some real headlines. What, if anything, will Sanders successfully drag Clinton further left on?

Simply put, facing off against Sanders is a much more strategically confounding position than it would be if Clinton were facing Marco Rubio or Ted Cruz or, god forbid, Donald Trump, because she doesn't have to play nice with any of those people. In the here and now, though, a few bad moves or flubbed attacks against Sanders could cost her dearly, and could ultimately rip the Democratic Party in half.

Back in 2008, the fear among Democrats was that Clinton supporters would bolt and leave Obama high and dry in the general election (they were often called PUMAs, short for "Party Unity, My Ass"). But now, the shoe seems to be on the other foot. The level of antipathy toward Clinton within Sanders' base of support is thick and palpable, and if they don't get their man as the nominee, it's fair to wonder where the enthusiasm will be come November.

Sanders, on the other hand, has to figure out how to press his advantage and widen his already considerable lead in New Hampshire, all without torpedoing the positive, issues-driven aura of his candidacy. And it wouldn't hurt if he could come up with an appeal to nonwhite voters besides "They'll come around when they know me," which was essentially his answer during the fourth debate.

In short, whatever happens, this much is guaranteed: You're in for a contentious and fascinating clash on Thursday, and it could speak volumes for what the Democratic Party will be in years to come. Sounds worlds more interesting than watching Ted Cruz endlessly rave about Benghazi while Clinton sighs and dusts off her shoulder, no?