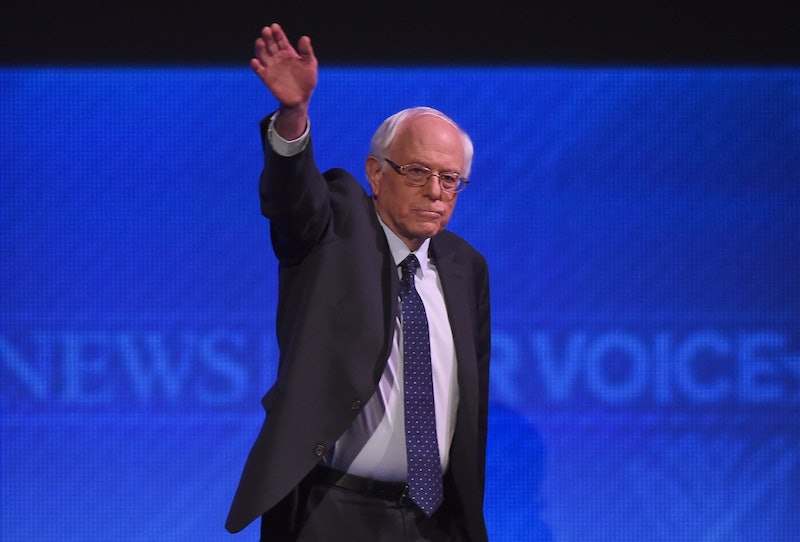 Don't look now, but another Democratic presidential debate is almost upon us. And this time, you couldn't even see it coming ― it's one of the four new debates agreed to by the Bernie Sanders and Hillary Clinton campaigns to fill out what otherwise would've been a very short schedule, which originally consisted of just six match-ups before the Democratic National Convention. This one, taking place in New Hampshire, will be aired on MSNBC and moderated by Rachel Maddow and Chuck Todd. And it could be a big one for the underdog: this debate is Sanders' chance to get an edge against Hillary Clinton, if only he seizes the opportunity.

If you're into politics, you already know what went down Monday night. Sanders and Clinton fought to the closest finish in the history of the Iowa caucuses, with Clinton claiming a narrow victory by 0.2 percent of the vote (the Sanders campaign has yet to concede, in light of the razor-thin margin). But despite seemingly losing the final tally, Sanders was arguably the big winner of the night, proving that his supporters are real, motivated, and ready to vote, and claiming his share of the state's delegates (Iowa Democrats award delegates proportionally, rather than on a winner-take-all basis).

So what does Sanders need to do to really push this momentum forward? The answer, as it so often is with Sanders, seems simple, but will require some serious work. It's time to get specific ― really specific ― about police violence and criminal justice reform.

Now, to be sure, Sanders does have a publicly available platform on some of this stuff. So if you're an ardent supporter of his and you're getting ready to fire off a link to his admittedly impressive webpage on racial justice, no need! In virtually every respect, his stated positions on racial justice and the recent high-profile spate of police violence against black Americans are the strongest you're going to find in the presidential race ― or at the very least, his campaign is the only one to articulate it quite so forwardly.

But he's got a lot of room to grow, and still has some bad habits that may be hindering his efforts with the likely Democratic voters who care about these issues ― in particular the base of impassioned, tireless activists. Needless to say, Black Lives Matter is probably the most visible face of this latest civil rights frontier, and considering that Sanders is lagging badly among nonwhite voters ― badly enough, in fact, that his virtual tie in lily-white Iowa could actually be a pretty grim omen ― that this is an instance where stepping up and learning from past mistakes would not only be the just moral thing to do, but good politics as well.

So what more can he do? And for that matter, what can he try to cut out? Here are some cursory suggestions, based on his performance in the past debates, the framing of his rhetoric, and his at-times rocky relationship with progressive black activists.

Those are just a few possibilities, but whatever tack Sanders decides to take, he needs to do it soon. While the polls currently show him with a big, cushy lead in New Hampshire (although the polls didn't help much in Iowa), the South Carolina primary is right around the corner, and it'll be the first Democratic primary with a sizable black electorate. With his current momentum, this would be an absolutely perfect time to go in hard on these issues. Even if he can't win South Carolina, after all (he currently trails by about 30 points), there will never be a bad time to prove he can make these kinds of inroads.