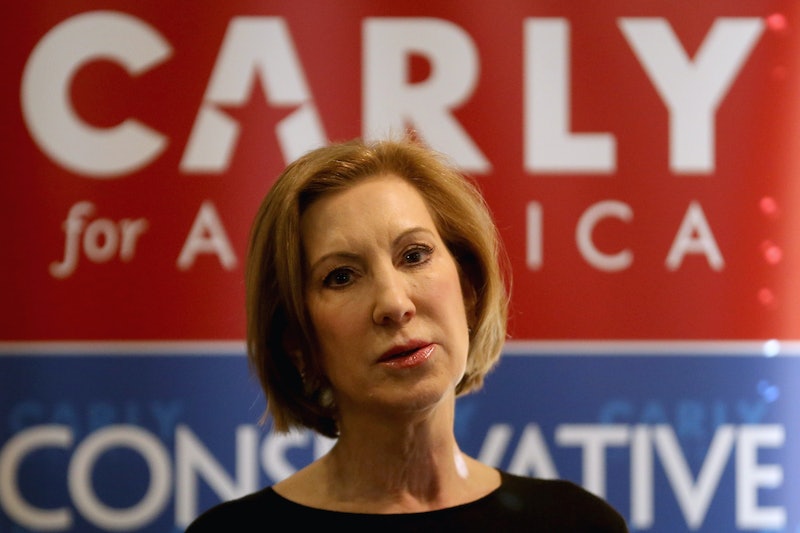 With GOP presidential candidates now falling faster than Chipotle's popularity, it's not exactly surprising that Carly Fiorina exited the Republican race Wednesday after she followed her disappointing Iowa performance with another bad showing in New Hampshire. When the former HP CEO announced that she was quitting, it was only a formality. Her campaign had long been straggling, with little signs of momentum for months. She couldn't even muster 2 percent of support in the Iowa caucus. The writing was on the wall, in block letters and permanent ink: It's over.

Fiorina stood out from the massive pack of GOP candidates mostly because she was a woman. Since she announced that she was seeking the Republican presidential nomination last May on ABC's Good Morning America, her campaign has been fairly unremarkable. Granted, at one point there were more than a dozen GOP contenders. (Remember when George Pataki and Bobby Jindal were running?) Between the cornucopia of candidates and the deluge of debates, it was especially challenging to make more than a flash-in-the-pan impression. Unfortunately, even when we look back at her campaign, Fiorina's most memorable moments were pretty disappointing to those of us who would like to see a dynamic woman one day win the Republican nomination.

The first moment came before Fiorina officially announced her candidacy, when she spoke at the Freedom Summit in Iowa in January 2015. Her jab at Hillary Clinton stole the show:

Like Hillary Clinton, I too have traveled hundreds of thousands of miles around the globe. But unlike her, I have actually accomplished something. Mrs. Clinton, flying is an activity not an accomplishment.

Her other memorable came at the CNN Republican Debate last September, when she denounced Planned Parenthood and propagated the false fears over fetal tissue sales provoked by the anti-abortion group the Center for Medical Progress and their infamous "undercover" videos. "As regards [to] Planned Parenthood, anyone who has watched this videotape, I dare Hillary Clinton, Barack Obama to watch these tapes ... Watch a fully formed fetus on the table, its heart beating, its legs kicking while someone says, 'We have to keep it alive to harvest its brain,'” Fiorina stated, describing a gruesome scene which is not actually in the videos at all.

So spreading lies to limit women's reproductive rights and taking some snarky jabs at Clinton are the legacy of Fiorina's presidential campaign. That's a shame for American voters, especially Republicans. Yes, Fiorina certainly tried to paint herself different, even as she quit the race. In her statement announcing her exit, Fiorina made a pointing of talking about feminism:

Her argument that feminism should not box or confine a woman into a role or opinion she does not want to have is a powerful and articulate one. Unfortunately, the sentiment is too little, too late. There are Republican women with actual political experience and concrete policies (whether or not you agree with them) who could help the GOP's image as a party of old white men. Gov. Nikki Haley, Sen. Kelly Ayotte, and Rep. Cathy McMorris Rodgers all come to mind as Republican women who would better serve their party than Fiorina did. It's no secret that Republicans have a "woman problem," and they need a woman to fix it. But Fiorina wasn't the right one.