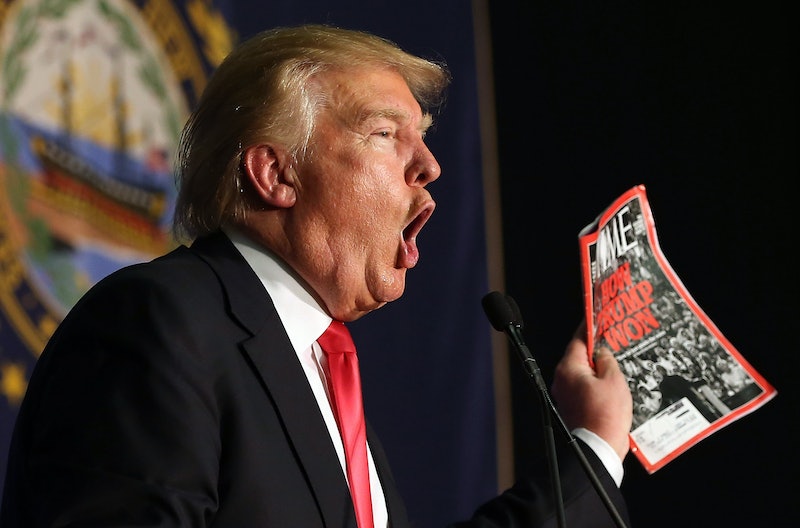 No, you haven't inadvertently clicked on an Onion article: Someone actually nominated recently-minted loser Donald Trump for a Nobel Peace Prize. Agence France Presse is reporting that the somewhat successful real estate developer and second-place finisher in Iowa has at least one well-placed friend who has sent a letter to the Nobel Committee in Oslo nominating him for the prestigious prize. He Who Should Not Be Named joins German Chancellor Angela Merkel, the Afghan Cycling Federation women's team, and the popular Pope Francis on the list of potential recipients.

You might be asking yourself how on Earth this has come to pass. Rest assured: pigs have not gained the power of flight. I haven't heard any reports of Hell freezing over. So how did the most bombastic, antagonistic, and, dare I say, repugnant presidential candidate in recent memory end up getting nominated for such a well-regarded award? All it took was one (currently anonymous) letter writer — who heaped flowing praise upon Trump for his "peace through strength ideology" — who has been pre-approved to nominate candidates to the committee for consideration.

So how does one nominate someone for the Nobel Prize? The privilege is extended to thousands of people who are spread throughout the world: members of legislative bodies, government ministers, former Nobel Prize winners, and even professors at selected universities. Whomever ended up penning the letter — crediting the four-time bankruptcy claimant with standing strong "against radical Islam, ISIS, nuclear Iran and Communist China" — can come forward publicly and take responsibility for their actions, but this isn't a requirement.

Even though the nomination process is supposed to safeguard against joke candidates, this wouldn't be the first time that a nominee espoused unsavory or downright violent points of view. Somehow, somewhere, someone with nomination power equated the likes of Vladimir Putin, Rush Limbaugh, Josef Stalin, and Fidel Castro with "peace." Hitler was even nominated for a Nobel Prize by E.G.C. Brandt, a member of the Swedish Parliament — although that was definitely a hoax, as the latter was dismayed over British Prime Minister Neville Chamberlain's appeasement toward the former.

Without knowing who wrote the letter nominating He Who Should Really Not Be Named, it is impossible to tell whether it was serious or if it was an attempt to ironically ridicule the former reality TV star and aspiring GOP presidential nominee. Either way, despite his loss in Iowa to walking personality disorder Ted Cruz, Trump's Nobel nod is a sign that we haven't seen the last of him yet.