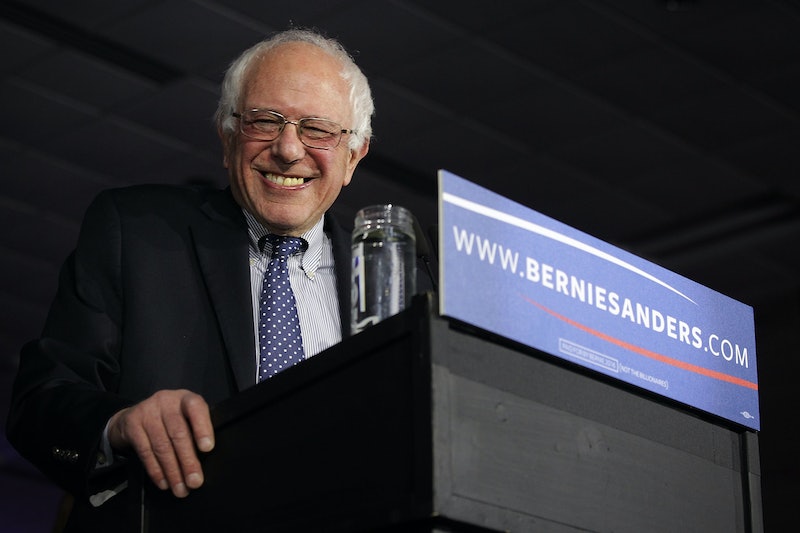 Whether or not you would vote for Sen. Bernie Sanders, I think most of you can agree that he seems like a pretty decent person. From his consistent support of LGBTQ rights, to his advocacy for veterans, Sanders has a respectable public record of standing up for his fellow human — even when they can't stand up for him. While speaking at a campaign stop in New Hampshire, Sanders rushed to the aid of a supporter who collapsed near the candidate's podium, proving to us all that the senator has his priorities in order. Interestingly enough, this is not the first time something like this has happened, and it's really no surprise that Sanders has a long list of good deeds.

According to The Wall Street Journal, the supporter who collapsed is a volunteer with a state Sierra Club chapter. The man — who is not named in reports of the incident — fell to the floor with a loud thud, pulling Sanders' attention away from his speech. Sanders said, "Oh my God," before rushing to the fallen supporter, who is reportedly OK. An ambulance was called, and after laying on the floor for a few moments the man was able to walk out of the room.

In October last year, Sanders had a similar encounter in which he helped clear a space for MSNBC's Andrea Mitchell who was nearly trampled by fellow correspondents. He got reporters to step back to let her breathe, and then proceeded to answer her questions as the rest of them watched. Sanders' concern for the basic needs of those around him is refreshing, and it lays the foundation for both his political and personal actions.

Although Sanders reported a relatively modest income in comparison to his peers in both the Senate and in the presidential race, he is known to give charitable donations to a number of causes such as at-risk children, endangered wildlife, military veterans, and the environment. In addition to his regular givings, after the release of his 2011 book The Speech: A Historic Filibuster on Corporate Greed and the Decline of Our Middle Class, Sanders gave all the proceeds to charity. Even his $850 honorarium for appearing on Real Time with Bill Maher was given away. Most notably, Sanders refused to keep a $2,700 campaign donation from Martin Shkreli, a pharmaceutical CEO who dramatically raised prices of a crucial drug for HIV and AIDS patients. Sanders instead donated the money to a Washington health clinic that supports people with AIDS. Shkreli was not happy, to say the least.

But that's just what Sanders is all about: sticking it to the greedy. And as far as I know, he tries his best to embody his ideology. Whether he's stopping a speech to help a collapsed supporter or ranting against selfishness within the one percent, Sanders seems to have his priorities in line, and I can't help but respect him for it.