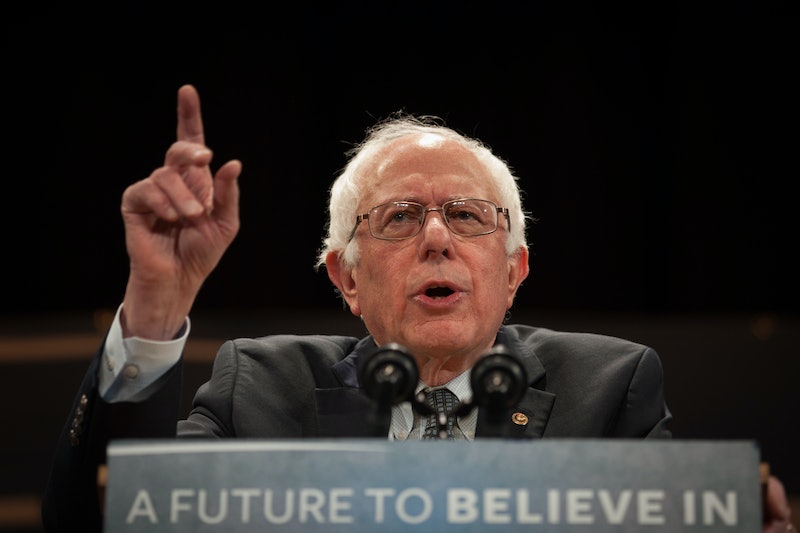 The American public has been inundated with opportunities to see the presidential candidates from both sides of the aisle battle it out debate-style for months. When a debate pops up pretty unexpectedly, though, gearing up for a night of Bernie side-eyes or Hillary's Star Wars references can actually be quite fun. So where can Bernie supporters watch the last-minute Democratic debate happening Thursday in New Hampshire? After all, Bernie fans wouldn't let a shorter-than-usual planning period get in the way of throwing a debate shindig.

Both Clinton and Sanders have been busy these last few days. Monday night saw an Iowa caucus too close to call while Wednesday evening brought a town hall and the first event sans Martin O'Malley. Americans haven't exactly been lacking in quality time with their Democratic presidential hopefuls, at least through the television screen. But Bernie lovers, being loyal as they are, never tire of seeing their favorite candidate show off his fiery personality.

Here are eight events happening in cities all over the country dedicated solely to cheering on Bernie during his third major televised event in one week. If you spot a debate-watching bash in your area, be as loyal as the rest of 'em and get your Bernie 2016 Tee ready.

The Mount Vernon watch party venue is the Skagit County Democratic Office, and the shindig is scheduled to start at 5:30 p.m.

A watch party at Coyote's Bar and Grill in Hillsboro is being hosted by WashCo4Bernie on Thursday. Show up at 5 p.m. and be prepared for a whole lot of Bernie love.

The members of "Lynchburg, VA for Bernie Sanders 2016" are asking Bernie supporters to gather with them at the Stoney Badger Tavern to "eat, drink and be merry while cheering Bernie on." The party starts at 8 p.m. and ends "whenever they throw us out..."

Caltech is hosting a watch party on Thursday at its Guggenheim Laboratory. The event, which starts at 6 p.m., gives you the chance to see Bernie's classic facial expressions on a big screen. How can you say no to that?

Burghers for Bernie's debate watch party is going down at Spirit Hall in Pittsburgh at 8 p.m. Supporters will also get the chance to provide their signatures so Bernie's name can actually get on the ballot for the state's primary.

The host of this at-home party is all about making sure every Bernie backer has access to the last-minute debate round. The event starts at 7 p.m. and free Bernie swag is up for grabs.

The Leadership Team of Lane County for Bernie Sanders has invited Bernie supporters in the area to join them at one of the member's houses. The host also invites food and beverage offerings to share with others at the party, so come with #FeelTheBern cookies in hand.

Watching Bernie dominate on the TV screen from the banquet room at none other than Rusty's Pizza Parlor sounds pretty much like an ideal evening. Come for the Bern, stay for the pizza.

Keep in mind that there are loads of phone bank events and organizing rallies scheduled for Thursday in just about every city across the country, and these events will likely get some debate-watching onto the itineraries for the evenings.