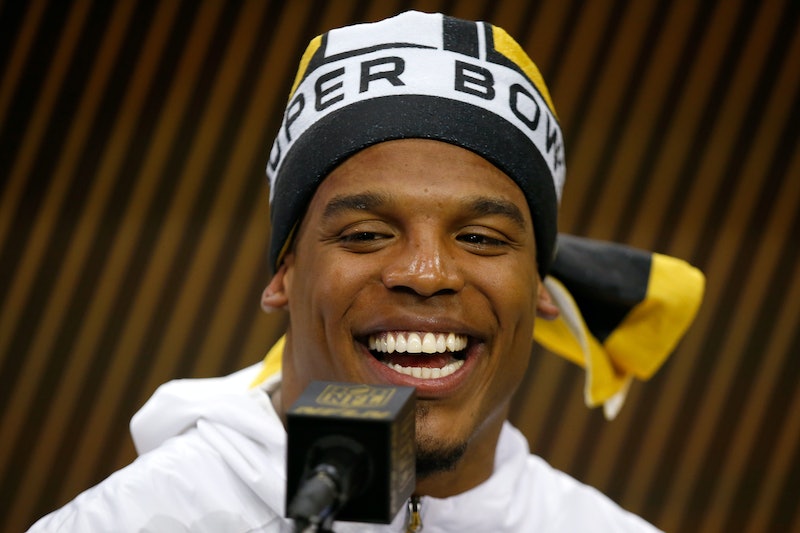 If he wasn't a household name already, Cam Newton has quickly become one thanks to his stellar performance on the football field this season. The Carolina Panthers quarterback has led his team through a near-perfect season, and he's taking the Panthers all the way to the Super Bowl on Sunday in San Clara, California. But before the Panthers take on Peyton Manning and the Denver Broncos, the Internet has taken on Newton with a collection of hilarious memes that poke fun of everything from his on-the-field record to his off-the-field wardrobe.

Newton has played for the Panthers his entire NFL career, yet they haven't always been as successful a team. He began his college career at the University of Florida, but he transferred to Blinn College and later to Auburn University. These transfers raised some eyebrows, particularly when it came out that Newton's father allegedly solicited money — up to $180,000 — from different schools that were interested in recruiting Newton.

Now, Newton is probably better known for his touchdown celebration and his wardrobe. The "Dab" became the preferred victory dance for Panthers fans during the most recent football season. This week, Newton also made headlines for sporting a pair of Versace zebra-print pants while en route to San Francisco for the game. As the rivalry between the Panthers and the Broncos heats up, fans on both sides of the game can find memes to fuel their team spirit.

Newton has been tested by the Internet, but the real test comes on Sunday when his team takes the field in its first Super Bowl appearance since 2003. If the Panthers win, it will be both the team's and Newton's first Super Bowl victory. Win or lose, though, there will likely be plenty of opportunities for new memes.

More like this
Jack Grealish’s Reaction To England’s New Kit Is The Most British Thing You’ll See Today
By Darshita Goyal
Behind The Hilarity Of The "POV: You Walk Into My Room" TikTok Trend
By Lexi Inks
Why TikTok Is Flooded With Controversial Videos About "Pick Me Girls"
By Courtney Young
This TikTok Song About An Unrequited Romance Has FYPs In Shambles
By Emma Carey
Get Even More From Bustle — Sign Up For The Newsletter