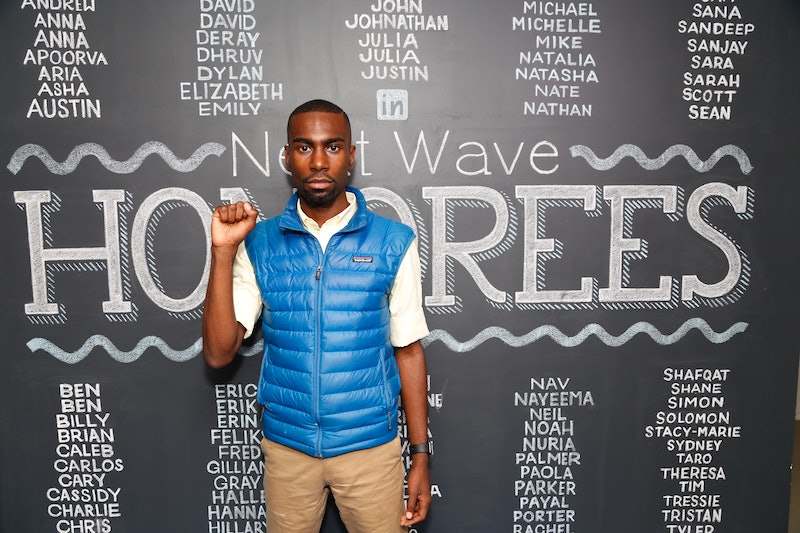 Hillary Clinton and Bernie Sanders aren't the only Democrats hoping to win an important election in 2016. In November, Baltimore voters will vote for a president for their country as well as a mayor for their city — and it's hard to tell which vote will be an easier decision. Among more than a dozen other candidates, Black Lives Matter leader DeRay McKesson will run for Baltimore's mayor, potentially taking his growing activist role to a new level.

McKesson became a recognizable member of the Black Lives Matter movement during the uproar in Ferguson, Missouri, in 2014, after Michael Brown's death at the hands of a police officer, and in his hometown of Baltimore in 2015, after Freddie Gray's death in police custody. McKesson, who will run as a Democrat, has previously met both Sanders and Clinton. He has also met with officials at the Department of Justice and the White House to discuss the need for police reform. Now, he's hoping to influence the political realm more directly, by serving in public office himself.

"Baltimore is a city of promise and possibility," McKesson told The Baltimore Sun. "We can't rely on traditional pathways to politics and the traditional politicians who walk those paths if we want transformational change." Thanks to his visibility on social media, he likely has plenty of grassroots support, but he's still not a shoo-in for the position.

For one thing, McKesson doesn't have much time to collect votes. The Democratic primary for the Baltimore election will take place on April 26, and the field is full of campaigning candidates. Although McKesson is originally from Baltimore, he has not lived in the city for much of his adult life, and he'll be running against some candidates who may have more local name recognition.

One such candidate is Nick Mosby, a Baltimore city council member. Mosby has sat on the city council since 2011, but his name is probably more recognizable now than ever before because his wife, Marilyn, is the state attorney responsible for prosecuting the Baltimore police officers involved in Gray's death last April. As a result, both Mosby and McKesson are closely connected to perhaps the biggest issue for Baltimore residents over the past year.

McKesson is also running against Sheila Dixon, who has held the office already. Dixon was Baltimore's first female mayor and the first African American member of the city council. Dixon, however, will have to overcome a history of felony charges from the last time she was in office.

Win or lose, McKesson will likely bring even more attention than the ongoing trials of Baltimore police officers ever could to the mayoral election to happen later this year. His decision to run seems to have reignited the discussion about police brutality in the city and beyond. That discussion may even impact a certain election that will take place across the country this year.