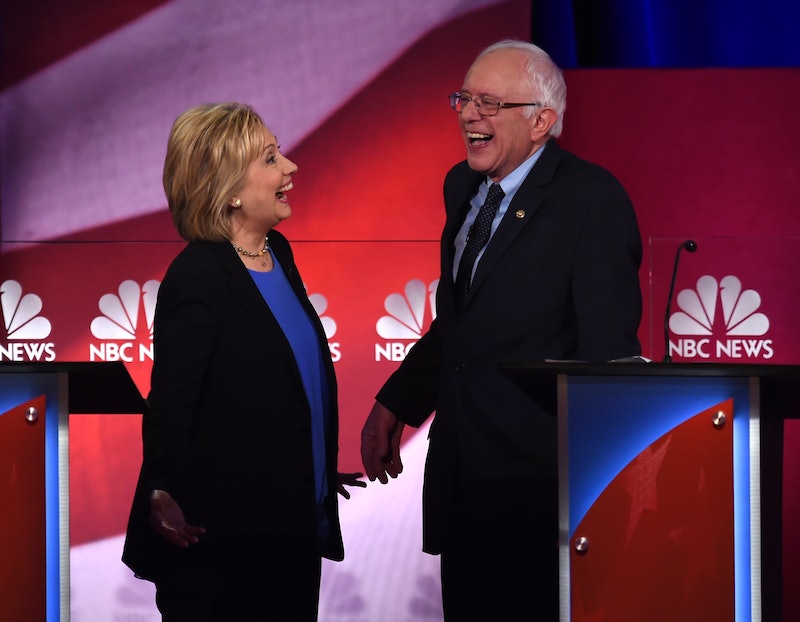 Americans have seen Democratic candidates Hillary Clinton and Bernie Sanders battle it out before, but the surprise MSNBC round scheduled for Thursday evening in New Hampshire provides viewers the first opportunity to see the pair together on stage since the ridiculously close Iowa Caucus vote. Though the two participated in a town hall event hosted by CNN on Wednesday, each candidate sat down with Anderson Cooper separately and you didn't get a chance to see them go head to head. So, here's the 411 on how to stream the Democratic debate online, because this is one Hillary-Bernie showdown that you definitely won't want to miss.

The debate, as always, will air live on television at 9 p.m. ET, and MSNBC is taking on the role of host this time around with Chuck Todd and Rachel Maddow moderating. Anyone hosting a Bernie or Hillary watch party only needs to turn on the TV and change the channel to the home base of Rachel Maddow and Anderson Cooper. But for those who rely on their laptops, tablets, and phones for all things small-screen entertainment, the debate will be streamed live on MSNBC.com as well as on the site for its non-cable sister network, NBCNews.com.

This means that even though you might have had no clue a debate was set to go down Thursday evening until this very moment, you can still witness the ultimate Hill/Bern showdown with relative ease. Both candidates have their own reasons for heading into Thursday's event ready for a fight.

Clinton's campaign couldn't have foreseen the major success Sanders saw at the Iowa Caucus, though the former secretary of state was able to barely declare victory at the end of the day. And with the New Hampshire primary election taking place just five days after the debate, Clinton will likely view Thursday night as an opportunity to secure victory in a second state. Sanders, on the other hand, has maintained a significant lead over Clinton in the New Hampshire polls and a debate win in the state could bode well for a clean sweep in the Granite State.

But if your WiFi glitches out and you end up missing out on the most critical moments of the New Hampshire round, don't fret too much. When Clinton and Sanders agreed to participate in Thursday's MSNBC debate, they also signed on to do three more debates over the next few months. You'll get your chance to watch the following round, which will be held in Flint, Michigan, sometime in March.