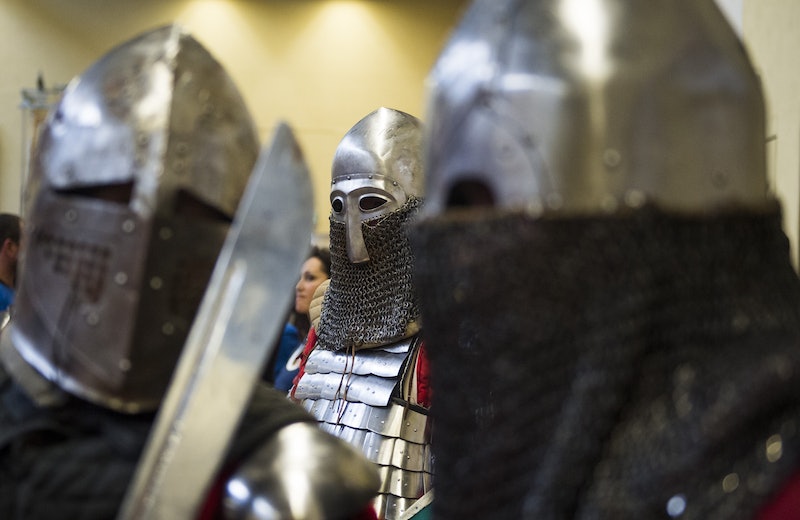 A group named The Return of Kings planned to rally in cities across 40 different countries this weekend, but after sparking fear and anger among those who hold the fundamental belief that men and women should be treated equally, the group second-guessed its endeavors to promote sexism. The group's leader, Roosh Valizadeh, cancelled a Feb. 6 mobilization that he predicted would be the "biggest meetup the world has ever seen." It's hard to believe, but The Return of Kings is a real group and they stand for some pretty disturbing things, to say the least.

Foremost, these men feel entitled to define the role of males versus females and dictate how they should differ. For reference, take a look at principle tenet number five.

Well, if that's not appalling, I don't know what is. Furthermore, the founder really doesn't skip a beat when it comes to defining the blog's audience. Obviously, no women are allowed. They've established that. But to ensure thorough exclusion, ROK specifies that the blog is for heterosexual, masculine men only. Because you know, science has proven without a doubt that sexuality is a black and white thing and gender roles are set in stone that hardened centuries ago. It hasn't.

Sadly, yesterday's masculinity is today's misogyny. The site intends to be a safe space on the web for those men who don't agree with the direction that Western culture is headed. ... Women and homosexuals are strongly discouraged from commenting here.

These men are exercising primitive, illogical ideals that have no place in a modern world defined by progress on all fronts. The group doesn't seem to understand that it's not doing any favors for men either, let alone for women, by promoting "yesterday's masculinity," the same masculinity that discourages boys from crying, being emotionally expressive, or liking the color pink. Oh, the horror. The founder is clearly upset that "yesterday's masculinity" has been dismissed. According to tenet number six, backwards is the way forward.

Elimination of traditional sex roles and the promotion of unlimited mating choice in women unleashes their promiscuity and other negative behaviors that block family formation.

ROK is ideologically contradicting because it defines itself as "neomasculine." In other words, the group thinks of itself as furthering the "new" version of masculinity. Let's not mistake "new" for "progressive" though. Instead, neomasculinity is a mixture of all things outdated and primitive including "traditional beliefs, masculinity, and animal biology."

For ROK, the fight to restore tradition and sexism isn't just a tiff with the dreaded progressives — it's a war. The international "tribal" meetup day announcement is accompanied by a painting of bare chested men wielding swords and donning bear skins. They also created code words for their battle. Before the rally was cancelled, the group informed members that they should ask men where the "pet shop" is. By "pet shop," they really mean rally. And just in case, the site makes sure to explain that if a man actually directs an ROK member to a pet shop, he's not in on the noble cause.

Apparently, some men are buying into it. The site has over 40,000 email subscribers and claims to have followers in 40 countries. Their articles are categorized by various topics including pickup tips, politics, girls, and wisdom, among many others. Their contributors author clickbait articles catered towards individuals craving an online resource for all things sexist. Some choice article titles include "8 Things Women Can Do to Be More Attractive" and "Why You Should Avoid Women Who Claim Rape and Sexual Abuse at All Costs."

BBC News has speculated on the possibility that ROK's neomasculine rallies were a hoax to gain publicity and spark major outrage globally. If that's the case, then the group certainly succeeded in making people hate it. Last summer, BBC reporters attended one of Valizadeh's lectures and proceeded to criticize it in a series called Reggie Yates' Extreme UK. The ROK founder wrote a statement in response to the criticism.

There is nothing the media can do anymore to hurt me, and even if they paint me as a baby murderer, I will still gain readers because of it. ... As long as my name exits the mouth of my enemies, I win, and I will continue to win.

According to BBC News, Australia was the first country to respond to the outrage. Immigration Minister Peter Dutton denied the American, who was trying to mobilize a gathering in Australia, a visa. Valizadeh never applied for a visa but allegedly attempted to recruit female Australian journalists with sexual requests (because that always works?) and wrote another response.

I will sneak in to [sic] your country, hold my meetings, laugh, and then slip out. Your gay authorities won't stop me.

Other news sources, like Jezebel, speculate that ROK is just a group of Internet trolls that should be ignored. The group initially gained media attention last year when people began responding to a February 2015 article titled "How to Stop Rape." In a tweet, Valizadeh claimed the article was a joke and that the group does not want to legalize rape in any way. Thus, the trolling theory isn't too far-fetched. But, if the followers give their Internet trolling a rest and move out onto the streets, there's going to be a much bigger problem.