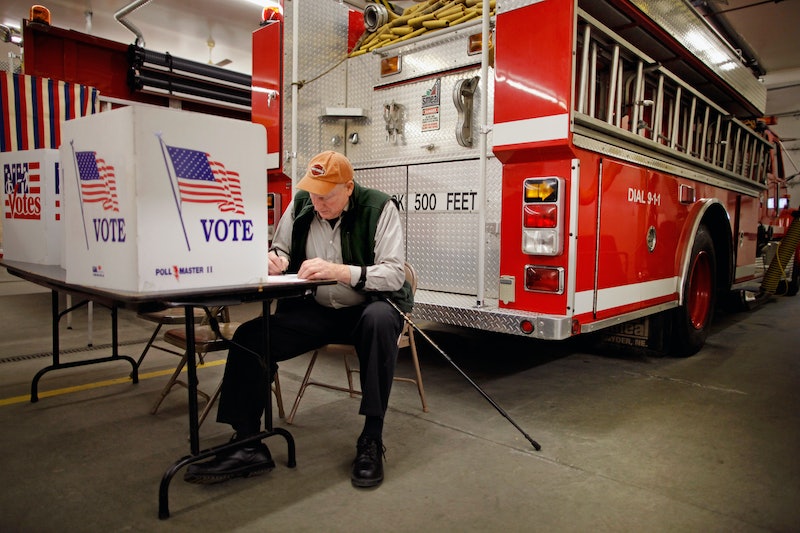 With Iowa done and dusted, the candidates, the voters, and of course, the attention are all concentrated in New Hampshire. Both the Democrats and the Republicans have seen presidential candidates drop out, and we're starting to get down to the ones who will be in this for the long haul. New Hampshire has a big role in shaping the electorate around the country, but the voters there won't keep you waiting long for results. That's because most of the polls in New Hampshire close at 7 p.m. ET, allowing plenty of time for counting before you head to bed.

How long it takes to decide the winner will depend on how close the vote is. In the past, election results have been called by news organizations based on a combination of exit polls and reported results from local precincts. This can backfire — as it famously did in 2000 — if the exit polls are off or the vote is close enough. Some networks called the vote for Al Gore, then others for George W. Bush, and ultimately it was too close to call and a recount was ordered.

In New Hampshire in 2012, Mitt Romney gave a victory speech just 30 minutes after the polls closed. His competitors weren't even close. He took nearly 40 percent of the vote, while second-place Ron Paul had just over half as much, with about 23 percent. This year, the Republican race shows Donald Trump as the clear winner, but the results for second, third, and fourth place could take a while to determine. The polls show Cruz, Rubio, Kasich, and even Bush in a near dead heat. The Democratic race should easily go to Sanders, but the question will be by what margin.

According to the League of Women Voters' 411 Vote website, New Hampshire polls usually close at 7 p.m., but times can vary from one polling place to another. They open between 6 a.m. and 11 a.m. The counting should be easier than in Iowa, where voters had to huddle in groups for a couple of hours while caucus volunteers recounted. New Hampshire is a primary state, so voters can head to a polling station whenever is most convenient for them. Absentee ballots had to be submitted in person by 5 p.m. Feb. 8, or must arrive in the mail on Election Day (Tuesday, Feb. 9) by 5 p.m.

Last Wednesday night, Democratic candidates Hillary Clinton and Bernie Sanders were already in the state for an added CNN town hall, arguing over who is the most progressive. Sanders told CNN's Anderson Cooper that Clinton is out of step on a whole number of issues, including campaign finance reform, free trade, and the War in Iraq. "I do not know any progressive who has a super PAC and takes $15 million from Wall Street," Sanders said. "That's just not progressive."

Clinton tried to fight back the accusations about taking money from Wall Street. Cooper asked her about the paid speeches she gave at Goldman Sachs after her time serving as Secretary of State. Trying to explain one $675,000 payment, she said, "Well, I don't know. Um, that's what they offered." She did counter Sanders right to be the "gatekeeper on who's progressive." "I'm not going to let that bother me," she told Cooper. "I know where I stand."

Clinton got a rematch Thursday night, when she and Sanders faced off again for a debate which aired on MSNBC. She was full of energy, and did a good job of attacking Sanders' more-progressive argument. She also showed him up on foreign policy. Sanders, meanwhile, did a good job once again of linking Clinton to Wall Street. CNN's Timothy Stanley said that Clinton won on substance, but Sanders won on style.

Republicans took the stage Saturday on ABC. The Republican field has narrowed somewhat; only six participated. Donald Trump was back after having admitted that not participating in the Fox News debate leading up to the caucus may have hurt him. Former HP CEO Carly Fiorina and former Virginia Governor Jim Gilmore did not participate due to low poll numbers.

Fiorina wrote the Republican National Committee to have them intervene with ABC on her behalf. "This campaign has the same number of delegates as Governors Bush and Kasich while Governor Christie has zero," she said. ABC did not relent, despite support of Fiorina from some other candidates and Republican insiders.

In the end, the debate focused on Florida Senator Marco Rubio. He was attacked for his lack of experience by his rivals, and struggled on the stage. Rubio needs a strong finish to propel him forward. As for Bush, Christie, and Kasich, their only hope is to beat Rubio in New Hampshire. Otherwise, their campaigns are DOA.

Whether the debates will have changed the polling results or not, you'll find out the winners Tuesday night, after polls close. Happy results-watching!