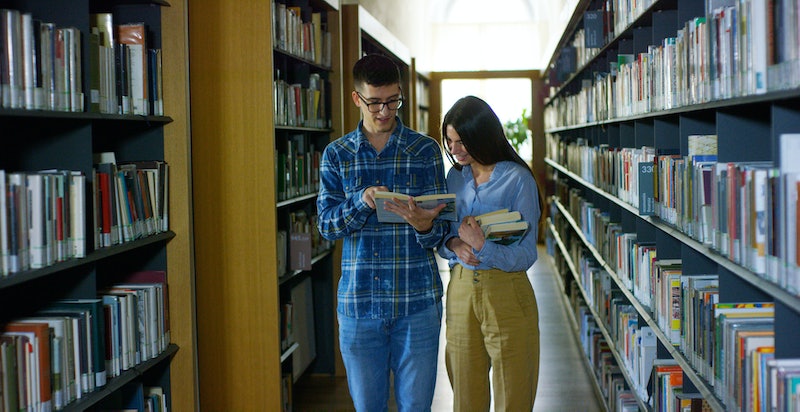 It isn’t easy to meet cool, clever, non-serial-killer romantic prospects in this scrambled-egg mess that is life after college, is it? Work’s not really a smart place to pursue love interests, unless you’ve lucked into a hip startup gig or a Terribly Corporate Entry-Level Programme (hi, banker friends) where everyone’s about your age. There are bars and Tinder, I guess, but you know who would totally hang out at a bar and have a Tinder account if he weren’t a fictional character? Joffrey Lannister, that’s who. I would know; I am exclusively hit on by the Joffrey Lannisters and, like, Grand Maester Pycelles of Manhattan.

I’m not saying you shouldn’t go to bars, or that you should be unfriendly to your coworkers, or that you should chuck your electronica in the bathtub (if they’ll even fit) and declare war on online dating. I’m just saying that it’s a hell of a lot easier to watch HBO GO in your studio apartment while having ice cream sundaes and mashed potatoes delivered to your very door than it is to haul yourself somewhere interesting to meet someone more interesting. But it is possible, really — you just need to know where to go. The list below should get you started.

Because I was consistently picked last in gym and have the emotional maturity of a 12-year-old, every time one of my friends has signed up for a post-grad kickball league or whatever, I’ve judged them pret-ty hard. As it turns out, though, the joke’s really on me, because when you join a kickball league (or a basketball league, or a trampoline dodgeball league — whatever), you meet a ton of new people and probably grab beers with them after performing heroic feats of athleticism. Even I have to admit that sounds kind of fun.

It would be kind of fly to be Old Money, wouldn’t it? I, for one, would do very well attending debutante balls and summering on Martha’s Vineyard and wearing clothes that look like they’re from the J. Crew catalog, but were in fact custommade for me by, like, Oscar de la Renta. Unfortunately, I am not Old Money, and perhaps you are not Old Money either. But you can pretend you are by signing up for an art museum society, and, consequently, the fancy parties and artist talks that goes along with it. Fees and vibe vary by museum, of course, so do some research — and an honest self-assessment — before whipping out your wallet.

Have you been paying attention to the weird-but-sexy experimental plays that have been cropping up over the past few years? The best known of these is probably Sleep No More — this is a gross oversimplification, but it’s basically Macbeth and Hitchcock’s Rebecca re-envisioned as a haunted house, and it's currently running in New York — but if you can't make it to New York, dinner theaters are pretty ubiquitous in metropolitan areas. By the (proverbial or literal) curtain call, you and the other members of the audience will have lived through, at best, a special and transformative night, or, at worst, something to make so much fun of over the pricey cocktails you'll drink afterward at the venue of said immersive experience.

4. Bookish gatherings of all stripes

As a general rule, reading books isn’t the best-ever way to meet people, unless you're in the movie Before Sunrise. (I have been known to snap my teeth at people who have, without asking my permission, reached out and tilted whatever book I’m reading so they can see the cover and make an inane comment. Vile!) But book release parties, author readings, poetry slams, and, yes, book clubs? Your literati lovers await! Maybe you'll even run into this adorable guy who is dying to find a girl who reads:

I was Googling fairly normal singles’ events for you, like boozy, goofy speed-dating, when I stumbled across a weekly clothing-optional pool and Jacuzzi party (listed on EventBrite, of all places). And, well, I don’t know — what if?! Or, if you imagine that a clothing-optional Jacuzzi sesh might be kind of foul, what about an Eyes Wide Shut sort of situation? Or a swinger’s club with a (food!) buffet? Just be sure to Google all there is to Google about your meet-up of choice.

6. Volunteering at an animal shelter

This is the literal opposite of sexy sex parties (no bestiality jokes, please. This is not that kind of article), but of almost equal appeal. Why would you not want to play with fuzzy animals and score Friday night plans all at once? Maybe if you have bad allergies, I guess, but this might actually be worth Benadryl-ing through.

More like this
Craving The Beach? Here's Your Guide To A Solo Vacation In Turks & Caicos
By Alexis Morillo
You Can Stay At The 'Hocus Pocus' House On Airbnb
By Alexis Morillo
8 Completely Unserious Tips To Make Your Cuffing Season A Success
By Ginny Hogan
10 Ways To Be More Empathetic To Your Partner
By Raven Ishak and Lexi Inks
Get Even More From Bustle — Sign Up For The Newsletter