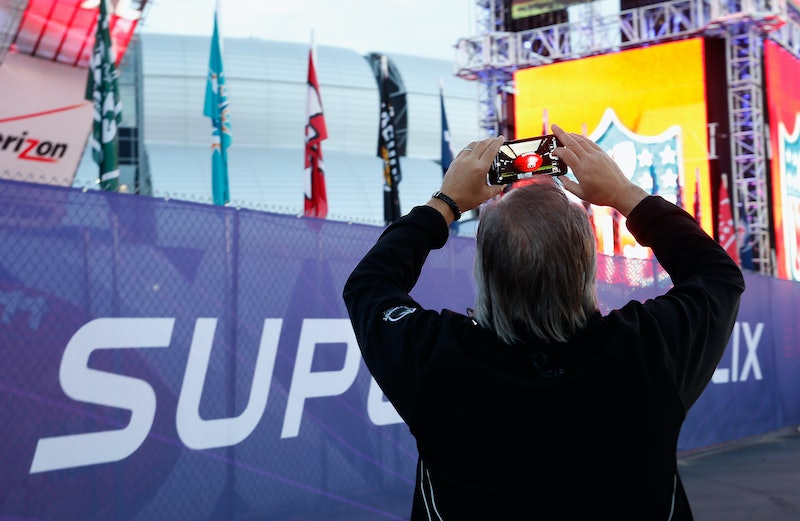 If any event was meant to be watched on a screen larger than your average human, it's the Super Bowl. Does a game-saving tackle at the one-yard line really happen if it isn't viewed on 110-inch television? (The answer, my football fanatic friends tell me, is unequivocal: Yes!) But in an age where ownership of television sets has been steadily dropping, what do people like me, who rely on laptops and streaming subscription services like Netflix and Hulu to keep up with our favorite characters, do? The good news for anyone lacking a TV or an invitation to a Game Day party come Sunday is that you can stream the Super Bowl for free on multiple devices.

Here's how to catch all the action unfolding at Levi's Stadium in Santa Clara, California, between the Denver Broncos and the Carolina Panthers on your smartphone, tablet, and laptop.

Anyone using a laptop or tablet can stream the game directly from its broadcast network, CBS. The game will be streamed live on the network's website CBSSports.com as well as through the CBS Sports app, which is available for iPad and Android tablets. The CBS Sports app is also accessible through Xbox One, Apple TV, Chromecast, Android TV, Windows 10, and Roku Streaming Player.

Even if you can't stay home Sunday to catch the entire game from the comfort of your couch, there's no reason you can't watch every commercial — I mean, play — while on the go. True story: My mother went into labor with my brother during Super Bowl 17 in 1983 and my father asked her to take a walk around the block during halftime. "Let's hold off on heading to the hospital until after the game," he said.

If mobile technology had been as advanced as it is now my father wouldn't have felt so shackled to the television. Streaming the game on your phone is slightly more complicated than watching on a laptop due to data usage so connecting to a Wi-Fi network or skipping any pregame coverage is recommended for anyone on a limited data plan.

Verizon Wireless customers will find themselves easily able to keep up with game coverage through the NFL Mobile service app on their smartphones. Just download the app prior to game-time and you're set, according to Verizon. The app also allows free streaming and behind-the-scenes access of other NFL events.

Non-Verizon customers will have to get a little creative to stream the game from their smartphone. You can stream straight from the CBS website via your phone, or look into remotely connecting your smartphone to your laptop to watch that way. Watching live streams of the game on Periscope or Meerkat — should anyone sitting in the stands at Levi Stadium choose to sacrifice their data and arm — is also an option.

Mega fans who plan to watch Super Bowl 50 on a wall-mounted 70-inch HD TV can take comfort in the knowledge that if any emergencies occur during the game — say, a birth — mobile and live stream technology makes it possible to watch on the go.

More like this
Jack Grealish’s Reaction To England’s New Kit Is The Most British Thing You’ll See Today
By Darshita Goyal
Behind The Hilarity Of The "POV: You Walk Into My Room" TikTok Trend
By Lexi Inks
Why TikTok Is Flooded With Controversial Videos About "Pick Me Girls"
By Courtney Young
Twitter Is Freaking Out Over Rihanna’s 2023 Super Bowl Halftime Show Announcement
By Stephanie Topacio Long
Get Even More From Bustle — Sign Up For The Newsletter