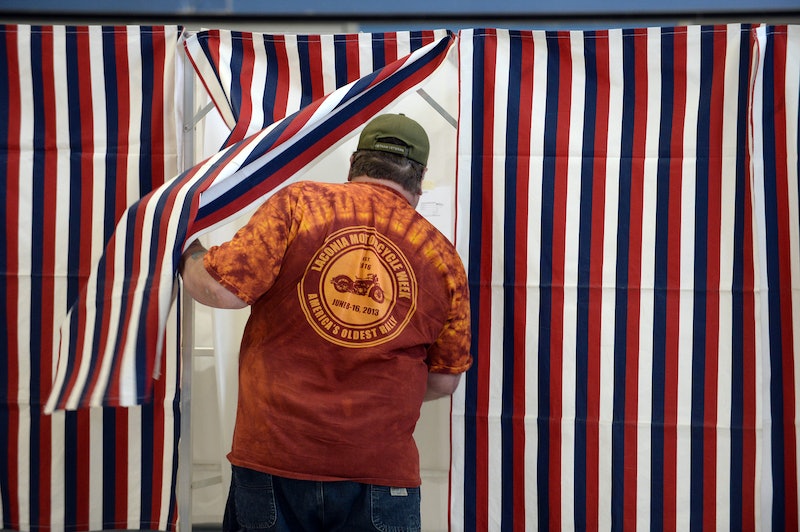 The people of New Hampshire pick presidents. Or at least, that's what the state would like you to believe. The Granite State continues to clutch tightly to its tradition of holding the first primary of each presidential election season. It went so far as to pass a law in 1975 which ensured that the state always holds its primary at least a week before anyone else. But why is the New Hampshire primary so important?

New Hampshire is critical not because it's first, but because it forces candidates to put aside overgeneralized campaign slogans like "Make America Great Again" and talk directly to voters about issues that matter to them (even if those issues don't exactly align with what the majority of U.S. voters care about). You can't win New Hampshire without shaking a few hands and ringing a few doorbells, and this sets an important precedent for election season by encouraging candidates to engage and interact with voters. But this isn't the only reason this primary has such an effect on presidential elections.

The New Hampshire primary is also important because of what I like to call the money factor. Candidates who win New Hampshire often find that their campaigns receive a few large, well-timed donations. Despite the state's small size, it isn't cheap to run extensive campaigns there, and candidates can exhaust their coffers before the race has even truly heated up. On many occasions, a defeat in New Hampshire has led to the end of the road for presidential hopefuls due to the loss of money and momentum. Although the creation of super PACS has begun to diminish the influence of New Hampshire's primary, with an extra-crowded Republican ticket this year, voters in the state could play a key role in whittling down the playing field. (For my own sanity, I really hope there are a few dropouts come Wednesday.)

But for all the hype around the state's early turn at the polls, New Hampshire voters can't reliably pick the next president, as the state is disproportionately white and rural in comparison to the rest of America. In 1988, then-Gov. John Sununu slammed Iowa (whose caucus is the U.S.'s only election event preceding the state's primary) by saying, "The people of Iowa pick corn; the people of New Hampshire pick presidents." The last candidate — Republican or Democrat — to ultimatley win the presidency after claiming victory in New Hampshire was George H.W. Bush in 1988. This means the state has had to eat crow during the last six elections.

Overall, the state seems to have a better record with Republican candidates, perhaps because New Hampshire residents are mostly conservative and white, much like the general Republican voter base. In the elections held since 1976, New Hampshire has picked five candidates who went on to win the GOP nomination, but only two of those went on to become president. In the same period of time, New Hampshire voters have only picked one Democratic candidate who eventually went on to win it all — Georgia Gov. Jimmy Carter in 1976. The state has also correctly chosen five candidates who became the Democratic Party's official nominee since 1976. With such an inconsistent record, it's natural to wonder why so much importance is placed on this primary.

While a few New Hampshire victors have gone on to win the presidency, others — like Bill Clinton in 1992 — have lost there (and in its overhyped sister, Iowa) but won the presidency, proving that the Granite State might not pick presidents nearly as often as they claim to. Accuracy and media hype aside, the New Hampshire primary ensures that candidates step down from their soapboxes and interact face-to-face with voters. The precedent set there matters because — to borrow a few words from Abraham Lincoln — we're a "government of the people, by the people, for the people."