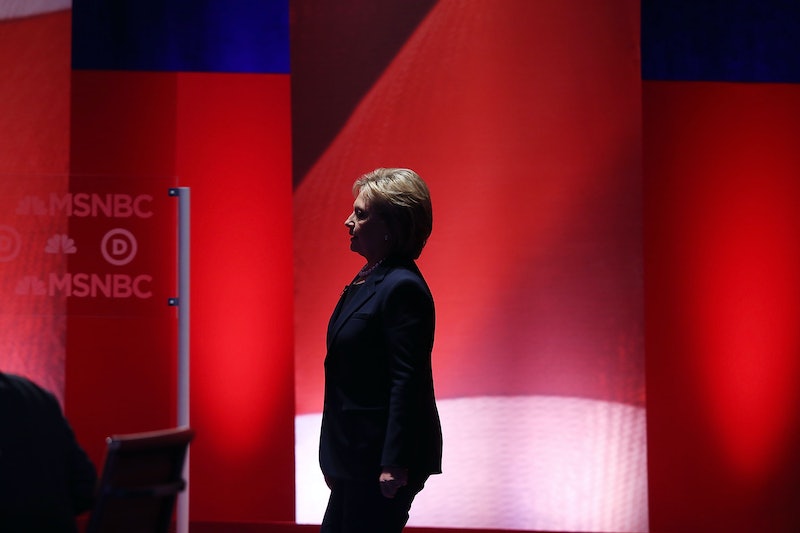 It would be hard to argue that the result of MSNBC's last-minute Democratic debate between presidential hopefuls Hillary Clinton and Bernie Sanders doesn't matter. While the case could be made that the first few rounds between the Democratic candidates were more akin to softball events where Americans could ease in to learning about each Democrat's political platforms, most voters could have predicted Thursday evening's debate in New Hampshire would be anything but mellow. With the results of the Iowa caucuses still fresh in everyone's mind and the New Hampshire primary just around the bend, any kind of victory — debate, primary, even a round of Words With Friends — makes a difference. And the winner of the MSNBC Democratic debate just re-lived the Iowa Caucus, because the showdown was almost too close to call. Yet, Clinton came away with the debate win in New Hampshire.

The days leading up to Thursday's sort-of surprise debate round brought on the kind of serious tension that had really only been known to the GOP crew prior to February. Jeb Bush tossed former protégé Marco Rubio under the bus, Ted Cruz threatened to leave the debate stage, and all the Republicans ragged on Donald Trump. The Dems, however, managed to keep all the get-togethers pretty friendly.

That is, until an Iowa Caucus forced Clinton and Sanders to go head-to-head, and the campaign shifted into "everything just got real" mode for both the former secretary of state and Vermont senator. The Hawkeye State apparently wasn't done with the Dem candidates, though, since the result of the New Hampshire debate appeared nearly identical to the Feb. 1 caucus: While Sanders had his moments, Clinton came away with a slim victory.

Sanders made a very big play by not backing down when Clinton accused his campaign of carrying out an "artful smear" against the former secretary of state, and his rebuttal worked. The Vermont senator drew connections between Washington heavyweights like Clinton and the persistence of big pharma companies, the fossil fuels industry, and Wall Street. And boy did the New Hampshire debate audience appreciate the moment.

But Clinton's strategic approach of categorizing Sanders as the candidate who is making big promises that won't be achievable works. On issues like health care, taxes, and college education, Sanders has been talking major transformations while Clinton has presented the slightly toned-down version, painting herself as "the progressive who gets things done." Clinton's platform may not seem as exciting, but it's hard not to think she's totally right. If Obama had such a hard time working with the GOP during his administration, what would the Republicans do to poor Bernie?

And when the time came for questions of foreign policy, the Sanders momentum took a deep dive. Dodging a question on ISIS and national security to instead talk about the Iraq war, Sanders didn't exactly prove wrong moderator Chuck Todd's statement that he hasn't offered Americans a foreign policy doctrine.

Fortunately for Sanders, the polls predict he holds the power of the people in New Hampshire, and the spontaneity of the MSNBC round could mean a Clinton debate victory won't help her snag another win on primary day.