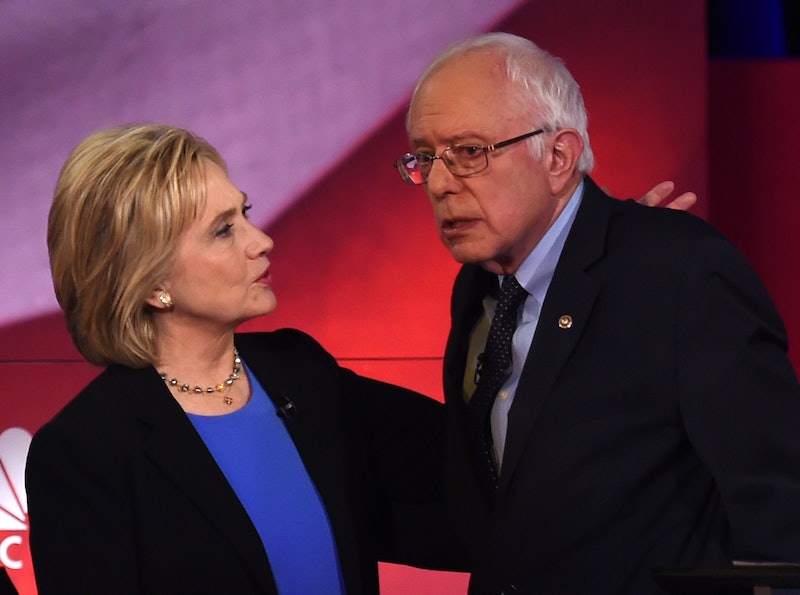 Thursday's Democratic debate featured fewer candidates than previous match-ups but all of the cringe-worthy and ab-tensing entertainment that came with the previous events. The debate, hosted by MSNBC in Durham, New Hampshire, featured Vermont Sen. Bernie Sanders and former Secretary of State Hillary Clinton just days before the much-anticipated New Hampshire primary. Even before they took the University of New Hampshire stage on Thursday, Sanders and Clinton were probably some of the most-meme'd candidates on either side of the presidential race, but memes and tweets from the Democratic debate hilariously made them all the more talked-about online.

Jokes aside (only for a second, I promise), Sanders and Clinton both had a lot at stake during Thursday's debate. The debate was a last-minute add-on that the party decided to squeeze in before the New Hampshire primary, so there wasn't necessarily much time to prepare. Sanders, who narrowly lost the Iowa caucus on Monday, would undoubtedly like to have a strong showing in New Hampshire in Monday's primary. After all, he's from the neighboring state, so he's well-known and popular among Democratic voters in the area. Clinton narrowly won in Iowa, but she saw relatively little support from young voters. That's significant because Thursday's audience contained lots of young voters, being that the debate was at a university, and many of the young voters seemed to support Sanders.

Now, back to the jokes. Sanders and Clintons have been made into punchlines many times before, as most political candidates are at one point or another. But Thursday's debate, with higher stakes and fewer candidates to pick on (former Maryland governor Martin O'Malley dropped out of the race after the Iowa caucus), new jokes were likely inevitable.

For the most part, Thursday's Democratic debate wasn't terribly funny from the stage. Fortunately, the commentary of the Internet said what the candidates couldn't. So, remind me, when is the next debate?