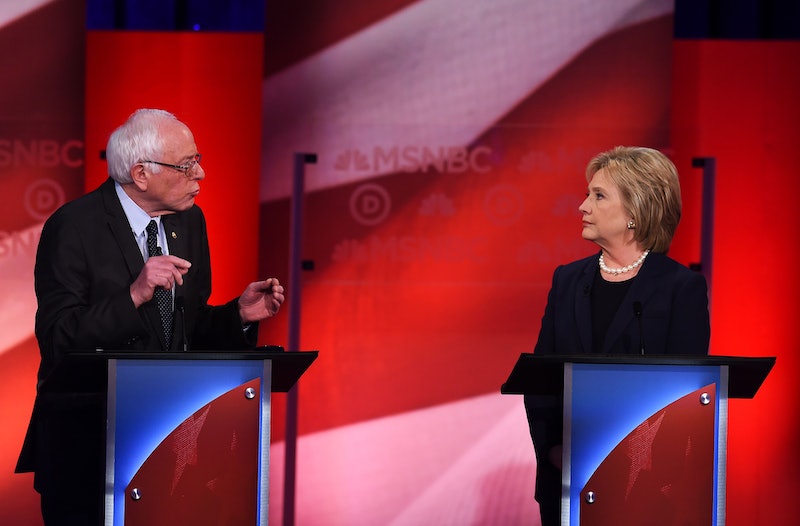 Thursday night brings the fifth Democratic presidential debate to living rooms all across America, and just like you might have expected, it's been little more confrontational this time around ― things got tense between Bernie Sanders and Hillary Clinton from the very first moment of their first head-to-head showdown, with each candidate rhetorically sniping at the other.

It was probably a certainty that you'd see a debate like this, now that it's just down to Sanders and Clinton. Former Maryland governor and long-shot challenger Martin O'Malley's presence on the debate stage didn't have much impact on the outcome of the past showdowns, but he did prevent the two from really going at one another.

Thursday, however, is shaping up to be something else altogether. Within the first 30 minutes of the debate, Sanders and Clinton traded barbs on who's more progressive, what makes somebody a progressive, Super PACs, and whether or not Clinton embodies the establishment. The shift in tone was apparent from the very beginning, but as it has gone along, it has quickly turned into the most fiery, aggressive, and forceful of the five debates so far, and arguably more seriously and trenchantly confrontational than anything on the Republican side.

Here are a few of the white-hot lines flying between Sanders and Clinton:

Suffice it to say, this debate has been everything that was promised and more, as far as fast-flying attacks, aggressive defenses, and cagey rhetorical dueling goes. It'll be for the people of New Hampshire to determine exactly what they thought of it ― although as the polls stand now, Sanders can probably breathe a little easier.