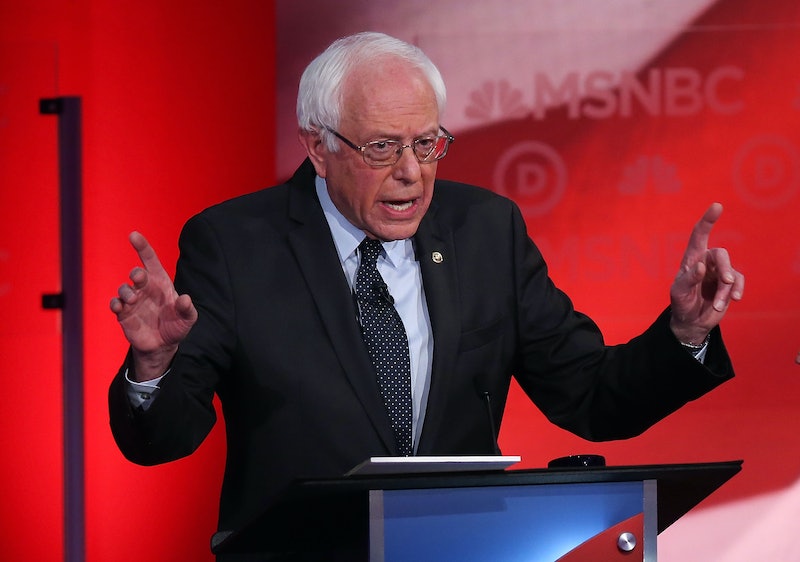 The fifth Democratic debate came somewhat unexpectedly, having been agreed upon mere days before the Thursday night event. The debate may have taken the remaining two candidates to the left by surprise, but Bernie Sanders appears to be fully prepared to face off until the wee hours. For the first time this election season, it'll be just the Vermont senator and Democratic front-runner Hillary Clinton taking the stage. Oh, and a mysterious coffee cup in the grips of the senator. What's in Bernie Sanders' coffee mug?

Viewers everywhere are avidly trying to figure out what Sanders has been sipping, occasionally balancing precariously on his podium. Is he participating in a drinking game to pass the time a little faster? Maybe he's centering himself with some all natural herbal tea. Sanders has been exceptionally animated this evening, so it's safe to say he's probably at least got some coffee swirling around in that mug. How else can one be woken up without caffeine? Viewers are similarly worried that Sanders will get a little too carried away and spill the liquid on the debate stage, effectively halting his diplomatic exchange between moderators Chuck Todd and Rachel Maddow and his fellow candidate.

Given the fact that Martin O'Malley ended his campaign the night of the Iowa Caucus, there is an extra podium just waiting to be used. O'Malley's combative persona is somewhat akin to a piping hot cup of coffee. Unless the mug becomes sentient, its stage presence could very easily mirror that of the former governor of Maryland, who is presumably outside of the University of New Hampshire venue busking. By carrying a coffee cup onstage, Sanders is also tapping into a key demographic of fellow coffee-dependent Americans who would rather do every major task with some sweet caffeine by their side.

The fifth Democratic debate promised to be one of firsts: the first time Sanders and Clinton debated on a stage all to themselves and, apparently, the first debate to get an explicit shoutout to a coffee cup by way of Sanders. The candidate is truly a man of the people and may very soon become a man of the coffee bean. As of this writing, Folgers has yet to issue an endorsement. Perhaps Sanders could get that lucrative big coffee cup push heading into the first primary of the election season.