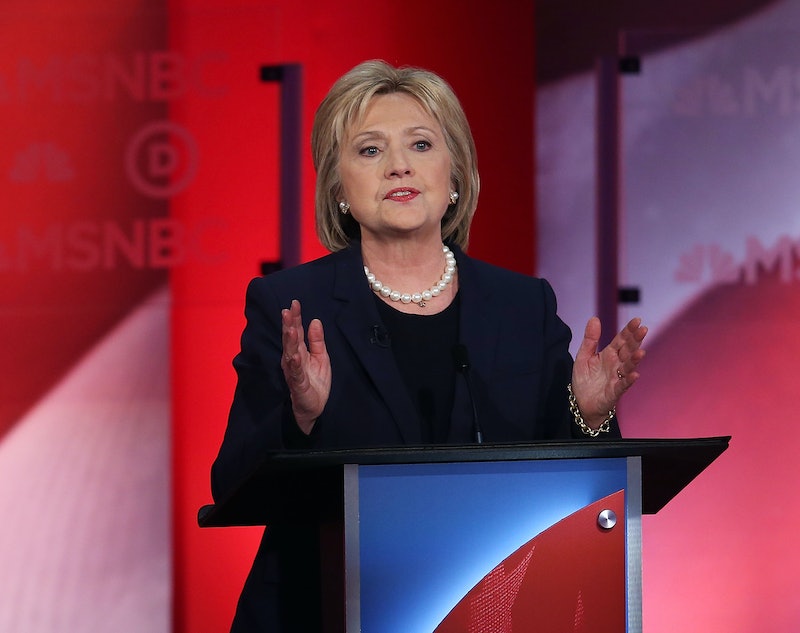 Things got very heated between Bernie Sanders and Hillary Clinton at Thursday's Democratic debate. Early on in the forum, a question came up that's becoming something of a focus during the campaign: Is Hillary Clinton part of the establishment? Clinton argued that she is not, because she'd be the first woman president, and that would be anti-establishment. And that's the one key quote from the debate you should know about, because it gets to heart of one of the most contentious questions in the Democratic primary.

"It's really quite amusing," Clinton said, "that running as the first female president I would be considered the establishment."

Throughout this campaign, Clinton has emphasized how historic her election to the presidency would be, and there's a good reason for that. The simple fact is that America, for the overwhelming majority of its existence, has been governed by white men, and it still largely is. That's where the power centers in America have always been, and this one fact has had an enormous, outsized impact on the direction of the country. To suggest otherwise is naive and historically inaccurate — remember, for example, that American women didn't get the right to vote until 1920.

The ascension of Barack Obama to the presidency was an enormous sea change in its own right, before he even enacted any policy. The very fact of President Obama proved to countless young black Americans that yes, they can grow up to be president, and that's nothing short of monumental.

If Clinton were to become president, she would send that same message to young American girls around the country. There's a very strong argument to be made that this is, in and of itself, a solid reason to support Clinton's candidacy, and that's exactly what Clinton was getting at when she rejected the "establishment" label at the debate.

Of course, others, including Sanders and his supporters, would look at the concept of "establishment" differently. They'd argue that the establishment is made up of the complex web of institutions and laws that have governed the country for the last several decades. That would include everything from lobbyists to campaign finance laws to sitting lawmakers. In short, Washington, D.C. By that definition, Clinton — a former First Lady, senator and secretary of state — would most definitely be considered part of the establishment.

This debate has been central to much of the animosity between Clinton and Sanders supporters during the campaign. They're probably not going to strike any agreement anytime soon, but Clinton's line at the debate was the strongest and most concise argument in favor of her being an anti-establishment figure that we've seen in this campaign so far.