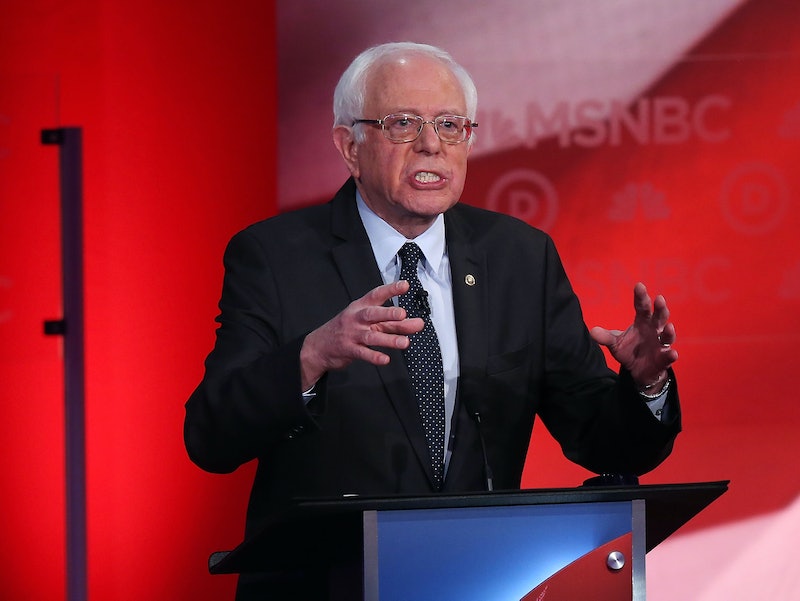 As candidate Bernie Sanders pointed out during Thursday's debate, he was one of the key players in the fight against bank deregulation, a fight he regrets losing years ago. In a heated confrontation with the former Chairman of the Federal Reserve Alan Greenspan, Sanders made a pitch that he says could have saved the banks from their crash and kept production on American soil. Sanders asked viewers to watch a video of the epic Sanders-Greenspan confrontation during the fifth democratic debate.

The video shows an obviously irritated Sanders explaining to the chairman that though he thinks Greenspan is an "honest person," he ultimately fails to understand "what's going on in the real world." He believes Greenspan only represents an elite few, saying, "the country clubs and cocktail parties are not real America." Much of Sanders' takedown of the chairman will sound eerily familiar to his rhetoric of today: a shrinking middle class and billionaire class supported by these same lower-income Americans.

In Thursday's debate, there has been much back-and-forth between Sanders and Clinton on their ability to solve problems and their respective track record. Time and time again through the debate, Clinton has called Sanders' track record into question. But as Sanders reminds both Clinton and the audience, he was on the House Financial Committee during a precarious time for banks, and fought against some of the top conservative and liberal economists on their desires to do away with Glass-Steagall. This is made more than clear in Sanders' video confrontation with Greenspan:

So, despite what Clinton would have viewers believe, Sanders' track record against bank deregulation has been consistent for decades. Greenspan himself has admitted to wishing he had listened to the Vermont senator. Now, it's time for voters to make a choice and vote in the hopes of preventing another of what Sanders calls "the worst financial disaster since the Great Depression."