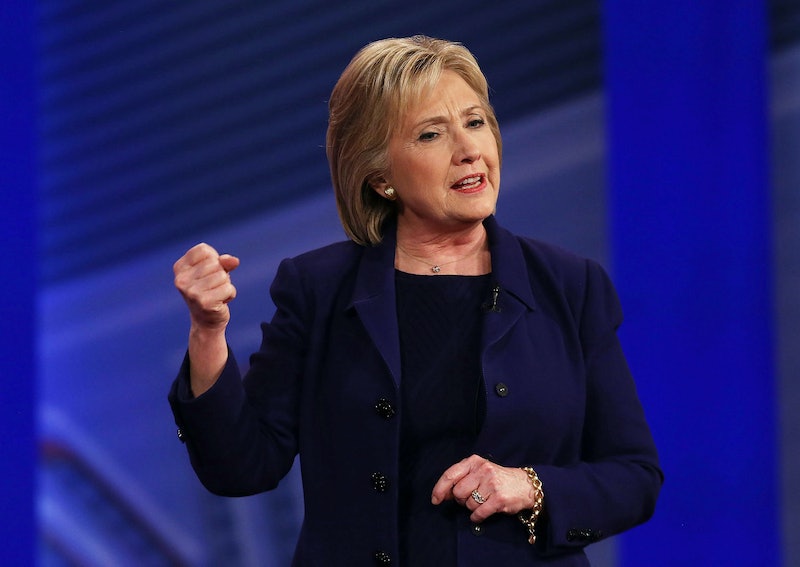 Capital punishment, aka the death penalty, probably isn't something that most Americans want to hear or talk about, but if you're running for president of the United States, you'd better believe that it will come up in conversation eventually. For Hillary Clinton, at least one of those moments came during Thursday's Democratic debate, when she was asked by moderator Rachel Maddow about her death penalty platform. Clinton expressed support for the death penalty, as long as states implement it properly.

Thursday's debate took place in New Hampshire, where only one person is on death row — for the crime of killing a police officer. Maddow mentioned this detail in her question to Clinton, asking, "Do you still support capital punishment, even if you do so reluctantly?" Clinton had previously come out in support of the death penalty back in October. This time, she said:

I do, for very limited, particularly heinous crimes, believe it is an appropriate punishment, but I do deeply disagree with the way that too many states are implementing it.

Clinton clearly indicated that not all states are using the death penalty responsibly. "I have much more confidence in the federal system," she said. Given that train of thought, she could have called for the death penalty to become solely a federal issue. After all, Democrats are known for favoring federal control versus state control of issues. She didn't go quite that far, but she did make it clear that she would like to see the Supreme Court do something about capital punishment, saying:

What I hope the Supreme Court will do is make it absolutely clear that any state that continues capital punishment either must meet the highest standards of evidentiary proof of effective assistance of counsel or they cannot continue it.

In New Hampshire, the death penalty is reserved for crimes of capital murder. The state uses the death penalty very infrequently: Only one person has been executed in the state since 1939. Although there is one person on death row, there is no designated building for death row inmates and there is no execution chamber anywhere in the state. Clinton would probably be supportive of such limited use of capital punishment.

There's one aspect of capital punishment that Clinton didn't mention on Thursday but definitely merits discussion. Recently, a shortage of the chemical combination used for lethal injection has caused controversial executions throughout the United States. Some states have even said that they would reconsider other forms of execution, such as a firing squad, if necessary.

Ultimately, Clinton supports the death penalty's existence, but not its current use. Outlawing the practice seems impossible as support for capital punishment remains high in much of the country. Perhaps the better conversation would have touched on methods of execution and how to ensure that even death row inmates are treated humanely.