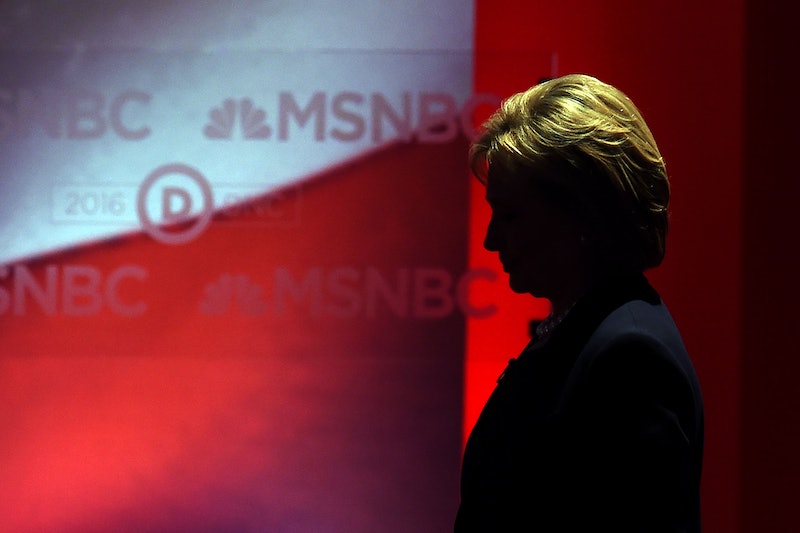 Hillary Clinton played it smart during Thursday night's debate by being secretive in a way that seems simple, but can't be understated in this progressively contentious race to the White House — she flipped over her notes so candidate Bernie Sanders couldn't look at them during a commercial break. It's reminiscent of what you might do to a classmate to prevent cheating off of a test, but despite being a bit elementary, it works. Any little thing helps in this race, though. MSNBC's debate is being heralded as the fiercest yet, so each candidate had to pull out all the stops to best their opponent.

With the Iowa caucus just a few days behind them, both Sanders and Clinton came out swinging. The early battleground state showed the candidates in a virtual tie, which came as an unexpected development to Clinton and a victory for Sanders. The results of the caucus posited the previously friendly rivals on the offense, and this difference between the early debates and Thursday's could not have been more stark.

Clinton prevented Sanders from taking a peek at her notes after the two went head-to-head on a point the Vermont senator has often criticized the former secretary of state on: her ties to Wall Street. Sanders believes that these relationships to corporate interests and banks, which she has been known to collect speaking fees from, will prevent her from being able to protect the middle class.

To this accusation, Clinton shot back: "It’s time to end the artful smear that you and your campaign have been carrying out in recent weeks, and let’s talk about the issues that divide us." Her response was met with boos from the audience, and then a cut to commercial by the moderator.

Regardless of Sanders' claims, Clinton is right to use every strategy she can — even if it's something as simple as flipping her notes over. In a race this close, it could make all the difference.