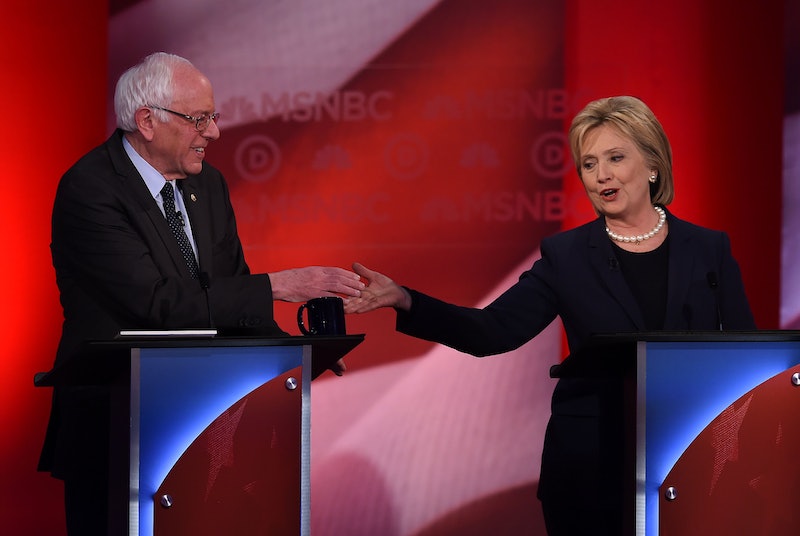 Well, that was quite a whirlwind couple of hours, wasn't it? The fifth Democratic presidential debate is now in the books, and it provided plenty for New Hampshire voters to think about. But whenever one of these things goes down, there are always some familiar questions on the lips of the candidates' respective supporters. For example: Did Bernie or Hillary talk more during the Democratic debate? Who dominated that all-important number, the speaking times?

Well, according to the folks over at MSNBC, they did a pretty good job timing this thing out. According to their broadcast, each candidate got about an hour ― not bad considering the debate was only supposed to last 90 minutes, huh? The fair speaking times were really highlighted by the natural ebb and flow of their answers, declarations, and contentious moments, too.

If there was any big positive in how the debate was moderated, it was that you never felt as though either candidate was allowed to filibuster for too long, but they weren't cut off abruptly or left grasping for words, either. In short, they both had a great chance not just to promote their own ideology and world views, but to defend themselves from incoming attacks, too. And they took full advantage ― it was basically the best debate of the 2016 election cycle so far.

In the past, when the Democratic field had five candidates (three of whom were essentially dead-on-arrival), things weren't so harmonious. In particular, avid debate watchers will recall former Virginia senator Jim Webb, who spent nearly a minute of his (admittedly short) speaking time at the first Democratic debate complaining that he wasn't getting more. Frankly, you could argue that giving a guy who's polling at 1 percent and isn't even really campaigning a whole 15 minutes to speak is pretty generous.

But luckily, it sounds like there won't be that kind of post-debate complaining this time around. When you're down to just two candidates remaining, everything technical about these debates gets much easier ― coming up with compelling questions that'll really inform would-be voters, giving them a fair amount of time to answer, allowing for a little cross-talking confrontation every now and then, the whole deal. And while there were certainly some issues that got painfully overlooked on Thursday night, at least both Sanders and Clinton had a fair shot to make their cases to the state of New Hampshire.