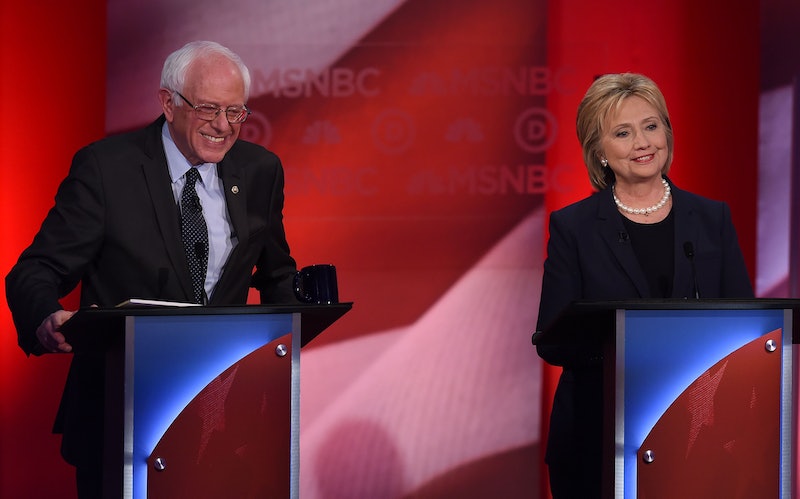 Presidential debate season sure can be a slog, can't it? There are just so many of these things ― we've already seen 12 of them between the Democratic and Republican sides, with five and seven, respectively, and it's starting to get pretty easy to predict what some of these candidates are going to say before they've done so. This actually makes it easy to identify one difference between the Democratic and Republican debates, a big distinction between how the two sides are making their case to the voters of their parties.

Look, obviously, there are actually a decent few differences that have been evidenced in the primary campaign season so far. While any rock-ribbed conservatives out there might disagree, the Democratic showdowns to date have all been far more substantive, policy-driven affairs, and with a lot less personal animus, to boot (in fairness, not having Donald Trump in your debate makes that easier).

But there's at least one major distinction between them that's impossible not to notice, and it stayed true to form on Thursday night. Basically, it's all about who they're focusing their attacks on ― while the Democrats have largely stuck to debating the issues within their own party, the Republicans can't stop bringing up what's happening on the other side.

If you've watched any of the GOP debates New Jersey governor Chris Christie has appeared in, then you probably know what I'm talking about already. He seemingly just can't help himself. He simply must remind everyone that hey, you might not be sure which Republican to vote for, but think of how bad it'll be if Hillary Clinton is president! He does this over and over and over, despite the fact that it clearly isn't helping his situation ― he's currently polling in sixth place in New Hampshire at just over 5 percent, and at a dismal 3 percent nationally, good for seventh place.

As Time's Daniel White noted, the Republicans' final debate before the Iowa caucuses ― you know, the one Republican front-runner Donald Trump didn't show up to ― was actually a veritable menagerie of anti-Hillary barbs, cracks, and flat-out insults. With the controversial and much-loathed Trump sitting on the sidelines, Clinton got mentioned nearly as often as he did.

By contrast, the Democrats have been pretty serene about things. Save for a fiery denunciation of Trump by Clinton in December (a far more practical, policy-driven criticism than anything Christie was throwing out there), and poor old Martin O'Malley's line about the Statue of Liberty and the barbed-wire fence, you simply don't see the same sort of aggressive fixation on taunting or name-checking specific Republican candidates. Instead, what you see is exactly what a primary is supposed to be about ― a robust battle over the ideological and practical soul of the party.

It really shows on debate night, too. While you know some portion of every GOP debate will be devoted to taking pot-shots at Clinton (and now very occasionally Sanders, too), it sort of feels like coming home to a quieter, firmer, more level-headed family argument when you click over to one of the Democratic ones.

Maybe this is because the GOP feels more of a need to shovel anti-Clinton rhetoric into the mouths of their voters, or maybe it's just that as the only two Democrats left, Sanders and Clinton simply can't afford to start looking ahead yet. But one thing's for certain ― it's much more engaging to watch the people on the stage debate one another, rather than shadowboxing with people who aren't even there.