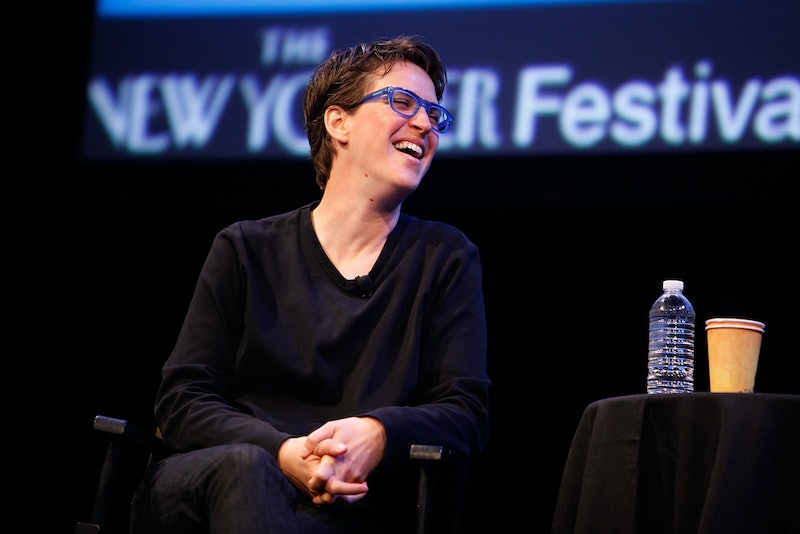 Throughout this election cycle, the Democratic National Committee has been criticized for burying the Democratic debates in what MSNBC's Rachel Maddow calls "TV Siberia." With the exception of the first debate, all of the previous showdowns between the liberal contenders had taken place on the weekend, competing with holidays and overall low viewership. Thankfully, however, Maddow set out to change that and was a big part in why Thursday night's debate took place at all. Perhaps to thank her, Clinton and Sanders hugged Maddow, who was also a co-moderator for the debate.

Cameras at the debate caught Maddow giving hugs to both Sanders and Clinton, a move that shows an atypical warmth between moderators and candidates. Clinton and Sanders have both been on Maddow's MSNBC show before, and she has pressed each one on tough issues regarding their own campaigns as well as their opponent's. She recently called out Clinton for her attack ads against Sanders, saying that it was wrong to cast "aspersions on his character."

But just as well, Maddow told Playboy in a recent interview that it's "hard to imagine" the Vermont senator being elected, saying his "sort of economic populism is a tough sell." Maddow's ploy to get more Democratic debates scheduled seems to have worked. In addition to Thursday night's debate, there have been an extra three sanctioned by the DNC. This came after weeks of Maddow calling on both the Democratic candidates and DNC to allow for more debates. She believes this will give voters the chance to see the candidates in a way that the previous schedule had limited them from.

It seems the candidates and voters alike are already responding positively to the new debate, as well. MSNBC's debate is being praised for being the most heated out of all of the showdowns so far, and Maddow's tough line of questioning helped bring out the best in each candidate. Viewers can therefore thank her stubborn persuasiveness over the candidates and DNC, and it's possible that even that hug helped out the atmosphere surrounding the debate, too. Each candidate was open with a fiery Maddow, and maintained a no-holds-barred approach throughout the entire evening. It's this type of debate that gives voters the clearest picture of who to pull for.