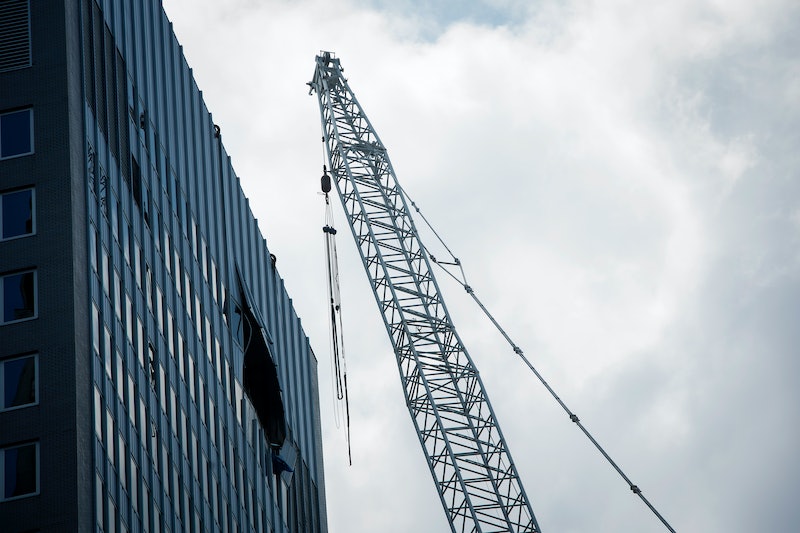 On Friday morning, at least 15 people were injured and one killed when a crane collapsed in downtown Manhattan. A construction accident near Worth Street and West Broadway in Tribeca caused the tragedy as snow covered the city, according to the New York City Office of Emergency Management, but the details of what happened are still unknown. Surrounding streets were closed and trains weren't stopping at the Franklin Street and Chambers Street stations while the chaos settled.

Emergency responders searched cars for anyone that could have been trapped inside, as photos of the incident show that the large red crane fell on multiple parked cars in the street, stretching down almost the entire block. A water main broke at Worth Street and West Broadway, and a gas main possibly broke on West Broadway. The stability of surrounding buildings also hit in the crane's fall was being checked by the Department of Buildings.

The New York Daily News reported that "Bay Crane" was printed on the side of the structure, the name of a Long Island City-based company that's website says it's "the leader in specialized transportation and logistics planning for the implementation of heavy hauling solutions in New York." According to Gothamist, the crane was being used at 60 Hudson, which takes up an entire block. An officer at the scene told Gothamist he believed it fell because of high winds in the morning's snowfall.

More than a dozen people were checked by emergency responders. Two were taken to Bellevue Hospital, one with critical injuries. The person killed was trapped in a car under the crane and reported dead at the scene.

Though not a common occurrence, crane-related accidents happen in Manhattan periodically. In November, a construction worker died after being pinned between a boom crane and a flatbed truck while checking a mechanical problem. A crane also crashed a heating and air-conditioning unit into a building on Madison Avenue in Midtown when a strap holding the unit in place snapped, injuring 10 people in May.

More like this
Chris Kaba's Family Continue Fight For Justice After Viewing Police Bodycam Footage
By Sophie McEvoy
Twitter Can’t Handle Liz Truss & Kwasi Kwarteng’s Drastic Tax Cut U-Turn
By El Hunt
A New Portrait Shows King Charles With William & Kate Before The Queen’s Funeral
By Stephanie Topacio Long
Who Is Nick Cannon Dating & How Many Kids Does He Have?
By Jordyn Tilchen and Radhika Menon
Get Even More From Bustle — Sign Up For The Newsletter