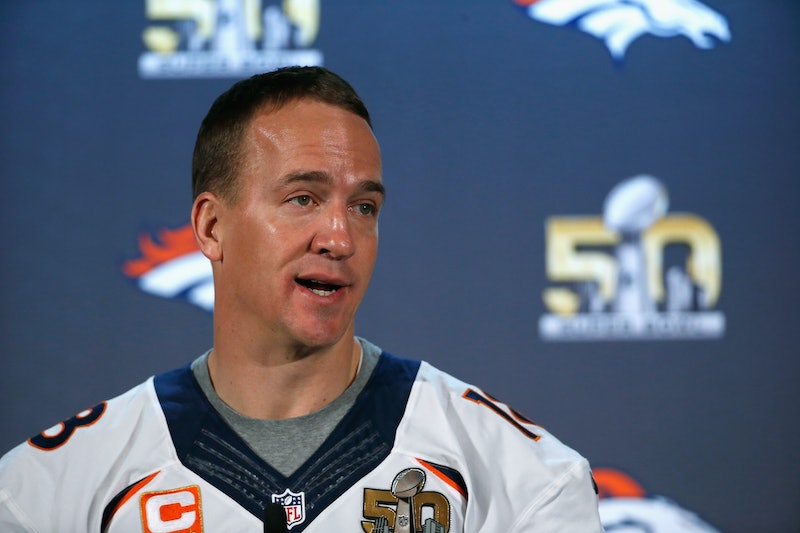 On Sunday, the Denver Broncos and Carolina Panthers will go head-to-head in Super Bowl 50. Just a month before the championship game, Broncos quarterback and NFL star Peyton Manning was accused of using HGH (human growth hormone) to recover from neck surgeries in 2011 in an Al Jazeera documentary. The athlete denied all the allegations, and the NFL isn't keeping him out of the Super Bowl based on what it sees as a loose possibility that he used the performance-enhancing drugs in the past.

The film, The Dark Side, was released right after Christmas and featured a former pharmacist at the Guyer Institute of Molecular Medicine in Indianapolis, Charlie Sly, who claimed Manning got HGH under his wife's name. "All the time we would be sending Ashley Manning drugs," Sly told Al Jazeera. "Like growth hormone, all the time, everywhere, Florida. And it would never be under Peyton's name, it would always be under her name."

However, Sly recanted his story and told ESPN's Chris Mortensen that he isn't a pharmacist and didn't work at the Guyer Institute in 2011. ESPN reported that Sly was licensed as a pharmacy intern in Indiana from 2010 to 2013, according to state licensing records. "When I was there, I had never seen the Mannings ever," Sly told Mortensen. "They were not even living there at that time. Someone who worked there said they had been there before. That was the extent of any knowledge I had."

The NFL said it's investigating Al Jazeera's allegations, and Manning confirmed that he was a patient at the Guyer Institute, but denied all claims that he took HGH. The Broncos quarterback said in a Jan. 28 statement about the allegations: "It's garbage from the first day it came out and it's still garbage today." Manning said he welcomed the NFL investigation, saying it would find "an absolute big, fat nothing."

As Manning prepares for his fourth Super Bowl game, the issue isn't fully resolved, as the NFL's investigation won't be complete before the championship. It won't stop the athlete from playing on Sunday though, and some sportscasters vowed not to mention the scandal during the game. CBS's Jim Nantz told WFAN’s Mike Francesa: "If we talk about it, we would only continue to breathe life into a story that, on all levels, is a non-story."

After last year's Deflategate Super Bowl scandal, in which Tom Brady was accused of having knowledge of New England Patriots' employees deflating balls used in the game, a less controversial championship game would be welcome. However, if the claims against Manning are proven true after the game, his reputation and the game's accuracy would be called into question.