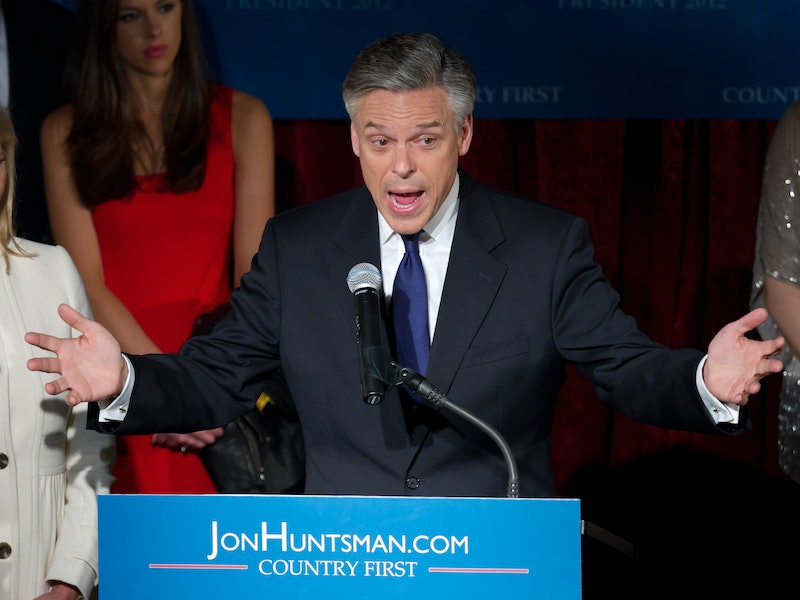 Back during the 2012 presidential race, there was a promising, clean-cut, Mormon former governor who charmed a good chunk of America, if not enough Republicans. No, we're not talking about Mitt Romney: We mean Jon Huntsman, Jr., the ex-Utah governor and former U.S. ambassador to China who was arguably Democrats' favorite Republican presidential candidate in 2012. Unfortunately, being a moderate didn't serve Huntsman particularly well in his campaign for the White House in 2012. After finishing third in the New Hampshire primary, Huntsman dropped out in January 2012, leaving Romney, Rick Santorum, Ron Paul, and Newt Gingrich to battle it out in South Carolina.

Huntsman's departure from the 2012 Republican race for the nomination was disappointing for many reasons. For one, he was a solid, clear-thinking moderate, which set him apart in a GOP field that initially included Michele Bachmann of false HPV vaccine-mental retardation link fame and Gingrich with his vow that the U.S. would establish moon colonies by 2020. Huntsman openly supported civil unions for same-sex couples, no easy pledge for a Republican, especially in 2011 (he later wrote an op-ed in The American Conservative in 2013 arguing conservatives should back same-sex marriage). He also decidedly challenged the GOP's anti-science rhetoric on climate change.

The extra bonus of the Huntsman campaign were his daughters, the Jon 2012 girls. Daughters Liddy, Abby, and Mary Anne made some fabulously entertaining videos, including "We're Bringing Huntsman Back," a parody of Justin Timberlake's "SexyBack," which is included below for your viewing pleasure.

After Huntsman quit the 2012 election, he also vanished from most Americans' memories, but it's not as if the former governor has been sitting on his thumbs for the past four years. Huntsman has devoted significant time and energy to environmental issues. In 2013, he spoke even more candidly about climate change and the need to ignore corporate influence on environmental policy, telling BuzzFeed that, "Corporate lobbies are always going to have a tendency to argue that which is in their long-term financial interest ... That's all fine until science proves us otherwise — you wake up to a 73-degree day in Washington D.C. and New York City in the middle of January and you say, 'There's probably something going on.'"

Huntsman has also applied his commitment to breaking the Republican mold to a larger crusade for bipartisanship as the co-chairman of No Labels, an advocacy group devoted to fighting political gridlock and encouraging politicians from both parties to cross the aisle. Considering his political career, it's no surprise that Huntsman has taken an active role in No Labels. However, what is surprising is that No Label has given its stamp of approval to Donald Trump (among other presidential candidates). Trump agreed to No Label's "Problem Solver Promise" as a public pledge of bipartisanship commitment.

It's not clear that Huntsman would personally support Trump, but he certainly was spot-on in assessing his popularity. This past August, Huntsman said of Trump on CNN, "People want a big, loud, brash protest vote right now. That's a good chunk of the Republican Party. And he is that person. And he embodies exactly the anger and the disgust that so many have about politics."

It will be a shame if Trump's bombastic approach to politics succeeds where Huntsman's centrist way failed, but it would make sense — it would just be politics as usual.

More like this
Buckingham Palace Shuts Down Rumour About King Charles III's Coronation
By Sophie McEvoy and Sam Ramsden
Romance Authors Are Mobilizing For Reproductive Rights
By Natalia Perez-Gonzalez
New Coins Unveiled As King Charles III's Reign Gets Underway
By Sam Ramsden
What Are The 7 Types Of Rest? Experts Explain
By Carolyn Steber
Get Even More From Bustle — Sign Up For The Newsletter