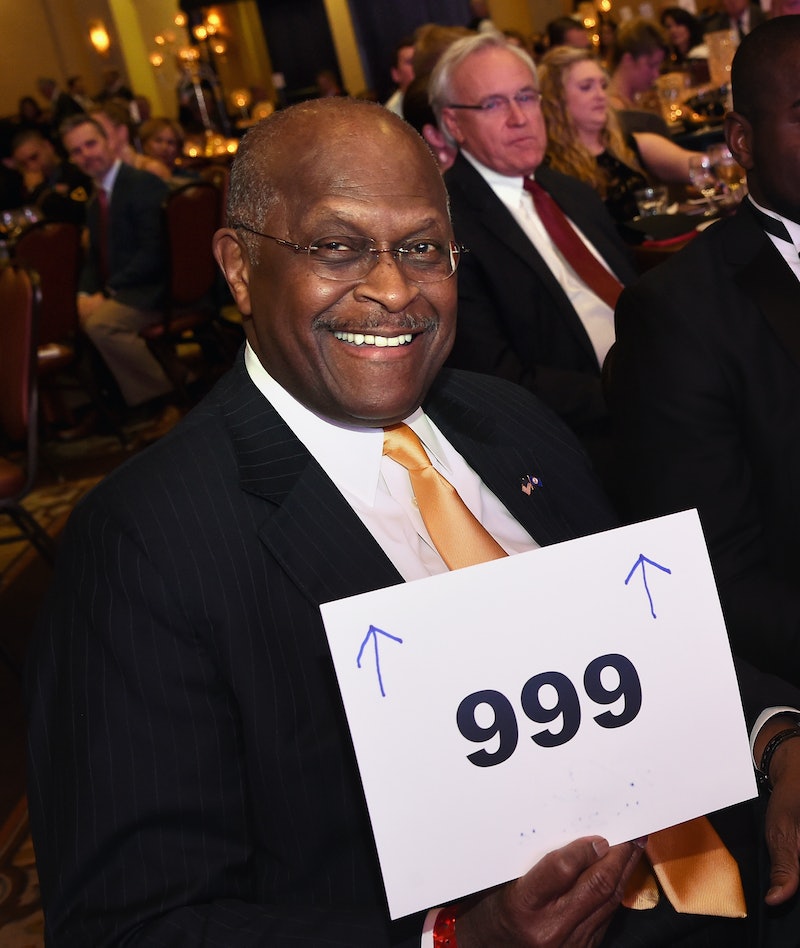 With the 2016 cycle in full swing, a lot of people are getting nostalgic for the elections of yesteryear. And by “a lot of people,” I mean political reporters. One candidate from the 2012 campaign who seems to have fallen completely off of the map is a certain pizza tycoon and restaurateur. What happened to Herman Cain, anyway? He was one of the many 2012 Republican presidential candidates who briefly led in the polls but collapsed before the Iowa caucuses. The former CEO of Godfather’s Pizza, he positioned himself as a political outsider who’d run America like a business, and was most famous for his “9-9-9” plan. This was not a three-for-one special at Godfather’s Pizza, but in fact a tax proposal that gained some popularity with voters.

After ending his presidential run, Cain transitioned from politician to pundit. He launched a website and blog called CainTV, on which he and other writers chime in on current news and politics, and also started hosting his own radio show on Tulsa’s KMRG. Both are still operational, and he recently released a new book called The Right Solutions.

In 2011, Cain won a Florida straw poll, and for a brief time he polled ahead of his Republican opponents in Iowa. He had several things working against him, however. One was his almost complete ignorance of foreign policy. Cain warned that China, which has had nuclear weapons for four decades, was “trying to develop nuclear capability,” and suggested that Israeli leaders “don’t have a big problem” with Palestinian right of return. At other points, he referred to “the president of Ubeki-beki-beki-stan-stan,” implied that Cuban is a language, and answered a question about Libya simply by saying, “9-9-9.”

In addition to all of that, Cain’s presidential bid was derailed by a series of infidelity rumors, including the allegation that he’d carried out a 13-year affair and then paid the woman to remain silent. Cain admitted to giving the woman money, but denied having any sexual or romantic relationship with her. It’s impossible to say what specifically took down his candidacy, but he suspended his campaign in 2011 and endorsed Mitt Romney.

Cain has recently opined on 2016 politics, referring to Black Lives Matter as “a phony movement” and criticizing Marco Rubio and Ted Cruz for hitting each other on their voting records in the Senate. He hasn’t endorsed anybody yet in the Republican primary, although he has said that “if Donald Trump becomes president, I would not be unhappy.”