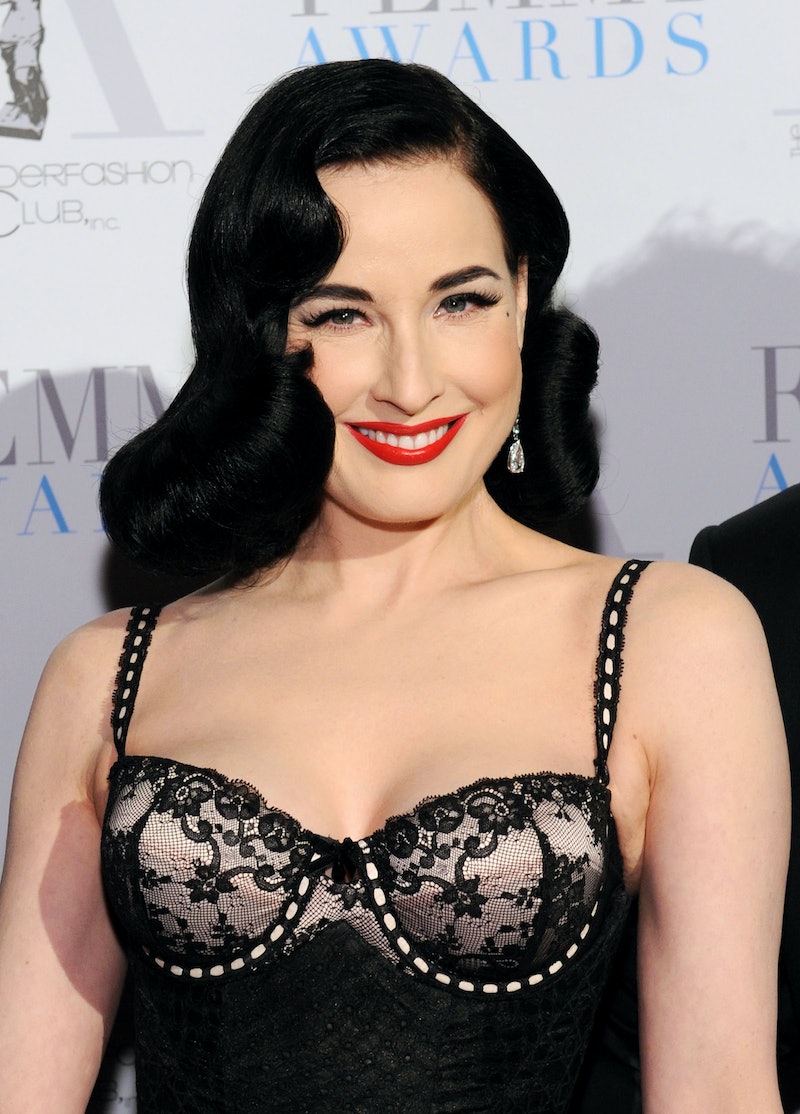 If there's one underrated beauty and body positivity icon out there, it's probably Dita Von Teese. I recently rediscovered how awesome this makeup guru, entrepreneur, and entertainer is when I read her new beauty book Your Beauty Mark: The Ultimate Guide To Eccentric Glamour . If you're not familiar with Von Teese, she first gained popularity in the 1990s as an exotic dancer, but has since gone on to do be everything from a burlesque dancer, an actor, a lingerie and hosiery designer, an author of multiple books, and a beauty icon who often does all of her own hair and makeup.

Von Teese has such a unique way of connecting to her audience. To me, it seems like she's created a persona for herself that is much like a Marilyn Monroe figure in contemporary pop culture. She is both eerily mysterious yet eccentrically open. I think this is why she's so intriguing, because not only is she immensely talented, but she's not afraid of standing out from the crowd. Her willingness to be different and define glamour on her own terms is such a body positive attitude to embrace.

Von Teese has certainly shared body positivity with the masses, so if you're curious as to what her personal brand of body positivity looks like, here are 11 of her best and most badass moments.

1. When She Launched A Lingerie Line For Moms

Before anyone jumps to conclusions about the implications of moms needing separate lingerie from their childless female counterparts, Von Teese's lingerie line Von Follies was made to empower new mothers and cater to their post childbirth bodies.

For example, some of the maternity bras in the collection include moveable cups, designed for easy access for breastfeeding babies. In an interview with ELLE, she explained that her goal was to create luxury products by and for women, with no male gaze needed. "My lingerie lines — even before the maternity bras — are not about seducing men or even being sexy," she told the publication. "It's about bringing beauty and luxury to your everyday life, and not storing it on the shelf or putting it on for a man. My relationship with lingerie has always been about self-seduction and what makes you feel good."

2. When She Preached The Gospel Of Size Inclusivity

In an interview with Huffington Post regarding waist trainers and corsets, the latter of which she has also released a line of, Von Teese emphasized how many other retailers only make these items for straight size women. The idea of categorizing the entire female population into three categories — small, medium, and large — felt uncomfortable to her. She's always understood that women of all sizes are interested in wearing corsets.

“When I’m performing, I see a vast audience of mostly women who are embracing glamour and retro style and they’re all different shapes, sizes, and ages," she told Huffington Post. “I’m always pushing to say can we make this up to a bigger cup size, but some styles can’t support a larger bust and there are changes that need to be made which means it won’t always look the same.” Her line ranges from sizes 8A to 20F.

3. When She Denounced The Concept Of Bikini Bodies

In summer 2015, Von Teese spoke to Hello! Magazine about some controversial protein powder advertisements that were making waves in the UK. "Forget that beach body ready stuff; find role models that you can actually aspire to look like and appreciate different types of beauty," she told the publication. "Instead, I looked at other idols — Rita Hayworth, Hedy Lamarr... I looked at these totally beautiful women and thought, 'I can aspire to that.'"

4. When She Took A Victim Of Cyberbullying To Lunch

Von Teese made a major statement against cyberbullying and fat shaming when she showed compassion to a 46-year-old Liverpudlian man named Sean O'Brien. He became known as the "Dancing Man" by the Internet when a photo of him was posted that included the caption, “Spotted this specimen trying to dance the other week. He stopped when he saw us laughing."

There was a massive amount of backlash against the bullies on the Web, and Von Teese was one of the people who spoke out and did something about it by taking O'Brien out to a taco lunch. This act shows just how much she cares about spreading body positivity.

5. When She Proclaimed Her Belief In Self-Love, But Also Her Struggle

Von Teese might seem like she has never-ending confidence, but she has always been upfront about having bad body image days, much like the rest of us. Just Jared reported that she told Bwatt Magazine, “Just like everyone else, I am not always confident, I have all the same self-doubt." Her solution? Self-love, of course. "I just try to love myself and accept things that I don’t like about myself and I think it’s something important for all women to know that we all have those feelings.”

6. When She Worked With MAC VIVA GLAM Twice For #MACDita

Von Teese worked with MAC VIVA GLAM in 2006, a sector of MAC cosmetics that creates lipsticks and glasses with 100 percent of the proceeds going towards the MAC AIDS Foundation. In order to mark the release of her new book, she recently collaborated with the brand again to create a special edition red lipstick in celebration of old Hollywood glamour.

"I've always loved MAC and we've remained close after working together almost 10 years ago for the MAC Viva Glam campaign," she has said of the new campaign. Considering this is arguably one of the best beauty charities out there, Von Teese's passion for social change and empowerment is evident.

7. When She Proved Her Understanding Of Body Politics

In a recent interview with Yahoo!, Von Teese discussed her views on plastic surgery and body image, as well as the stigma that still exists when it comes to talking about the realities of our beauty routines.

"We all want to know each other’s beauty secrets but no one really wants to reveal them because they get vilified so easily [...] I think everyone has a right — I don’t condone it and I’m not against it," she said. "I feel like it’s just a really extreme form of beauty that is right for some people, and I think what makes people happy is the right thing to do. What I don’t agree with is people trying to fit into society’s ideals of glamour and using plastic surgery to try to like please someone else."

8. When She Does Her Own Hair & Makeup

There's a lot to be said about being confident in your own skills, and not using a team of hairstylists, makeup artists, and estheticians as a part of the glam squad that so many celebrities utilize on a daily basis. In an interview with Nylon, Von Teese revealed that she thinks that glamour is inside of all of us and isn't something reserved to a specific person or group. “It occurred to me early on that [glamour] is something you make, it’s not something you’re born with. It’s not about what nature gives you, it’s what you make of it," she told the publication.

9. When She Didn't Give Any Effs What Others Thought

Von Teese doesn't care if you think her style makes her look older, because she's not at all agist. “Confidence is the important thing with beauty, mostly. It’s really about doing what you believe is beautiful. I feel most beautiful when I have my red lips on and when I have my cat eyeliner on and my hair curled — that’s what I feel good in, even though lots of people will see me with straight hair and no makeup on, and they’ll say I look so much younger. I don’t really care, though. I don’t care if they think I look prettier without the makeup and hair — it’s about what makes you feel good about yourself. I like having makeup on," she told Into The Gloss in an amazing personal interview. I'll just let this quote speak for itself.

Von Teese is clearly a body positive badass, and I look forward to seeing her make her mark in Hollywood and in the world of glamour at large.

Want more body positivity? Check out the playlist below, and be sure to subscribe to Bustle's YouTube page for more inspo!

More like this
I Tried Kendall Jenner's No-Pants Look As A Plus-Size Woman
By Sarah Chiwaya
42 Black Owned Fashion & Beauty Brands To Support Today & Always
By Mekita Rivas, Shea Simmons, Kui Mwai and Dominique Norman
Nails With Your Partner's Initials Are The Cutest Valentine's Day Mani
By Olivia Rose Rushing
Chrome Nails Were The Biggest Manicure Trend At The 2023 Grammys
By Olivia Rose Rushing
Get Even More From Bustle — Sign Up For The Newsletter
From hair trends to relationship advice, our daily newsletter has everything you need to sound like a person who’s on TikTok, even if you aren’t.