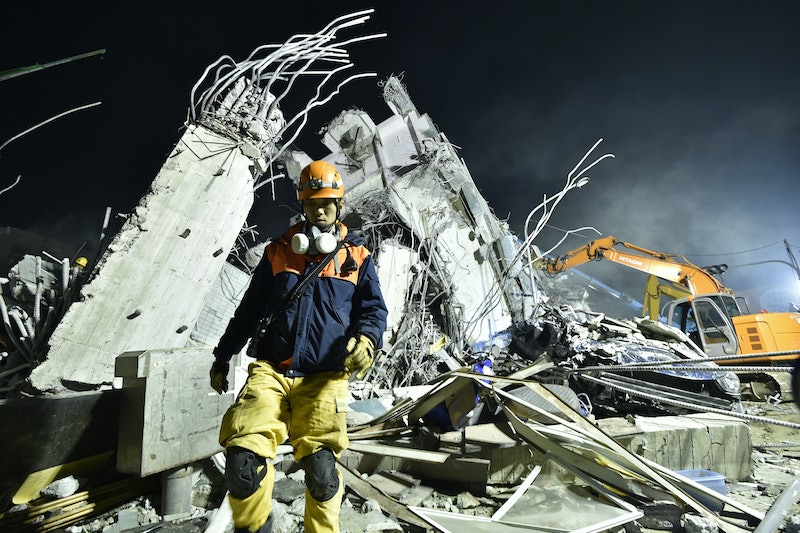 A deadly 6.4 magnitude earthquake struck a Taiwan city Saturday morning, killing at least 15 people, according to the Taipei Times. More than 100 people are reportedly missing in the southern Taiwanese city of Tainan after several buildings, including a high-rise residential apartment building, crumbled from the powerful quake. According to The Washington Post, about 340 people were already rescued throughout Tainan, and search and rescue missions are continuing into the night.

The high-rise tower that collapsed following the earthquake was Tainan's Weiguan Jinlong building, a 17-story structure located in the city's Yongkang District. Government officials told the Taipei Times that there were 256 registered residents of the building. While it's unclear how many of those residents were in the Jinlong building at the time of the earthquake, officials said first responders were able to rescue 167 people from the building, the Taipei Times reported. The news source added that 30 people were rescued from another building that also collapsed during the earthquake.

In the wake of this tragedy, here's how you can donate to the Taiwan earthquake victims. The International Federation of Red Cross and Red Crescent Societies said in a statement Saturday that the Taiwan Red Cross Organization has dispatched rescue and relief teams to the city of Tainan. The Taiwan Red Cross will be providing shelter, blankets, hot meals, and clothing to earthquake victims, as well as special tools, such as drills and cutting equipment, to the government search and rescue teams. The organization said 50 staff members and volunteers have already arrived in Tainan to assist victims; more volunteers are expected to arrive on Saturday.

You can donate to the International Federation of Red Cross and Red Crescent Societies on the organization's website. You can also donate directly to the Taiwan Red Cross here.

The Buddhist Tzu Chi Foundation as also set up a way to donate through its website and released the following statement:

A 6.4 earthquake occurred in Taiwan on February 6th at 03:57AM local time. Numerous buildings in the city of Tainan collapsed, and hundreds are trapped. Our volunteers are on the scene, assisting relief workers and those affected with hot meals and blanket. Taiwan is where Tzu Chi’s mission of love began – let’s return the favor and help those in need there at this tragic moment.

We will keep updating as more relief efforts are created.