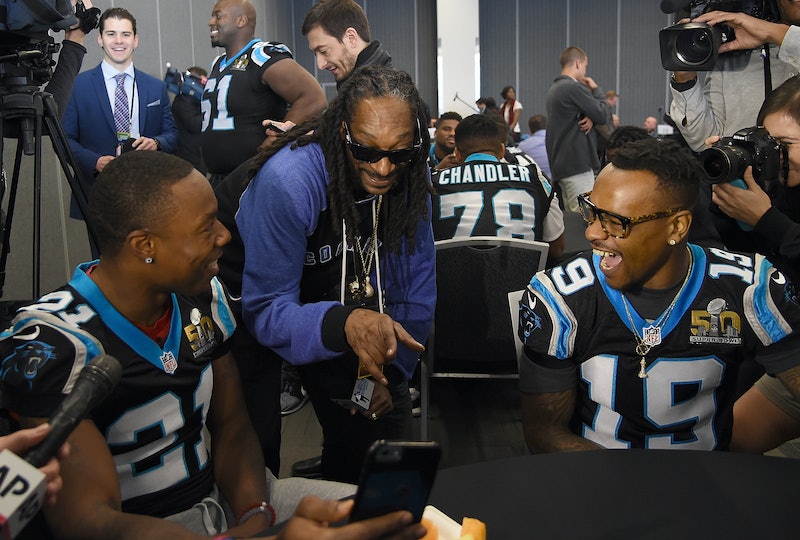 In the Internet age, the art of smack talking has been taken to new heights, and the mother of all insult-hurling, gloating, and general dissing — sports fans — are no exception. But while once you had to be in the room watching the game with your buddies to make those jokes land, social media has opened the doors for cross-country smack talk and a much wider audience. So ahead of Sunday's Super Bowl game, here are Carolina Panthers memes to load up your arsenal, because you know the Broncos are going to be ready to go.

There's no shortage of memes focused on Carolina Panthers quarterback Cam Newton, who has a penchant for boastful celebrations that often involve killer dance moves that can rival even Drake's "Hotline Bling" steps. But there is no shortage of general Carolina Panthers pride that pops up on the team's hashtag #keeppounding, which also calls up Twitter's tribute to the Panthers logos. You can also join in the fun at #SB50.

So study up, bookmark them, whatever. Because now you don't have to be within shouting distance to let everyone know exactly where your loyalties lie. Plus, you've got a whole new crop of strangers to impress now.

Newton's celebrations have often been called inappropriate, which some speculate has to do with race. So this meme, while maybe not super funny, raises a really great point.

... unless you're the Broncos. No balls for you.

Hey, just because there's a puppy bowl doesn't means cats can't get in on the fun.

No actual animals were harmed in the making of this meme.

Newton can. Although I'd pay good money to see Peyton Manning give it a shot.

Taking the worst thing to happen to Facebook in a long time and making it funny again. However briefly.