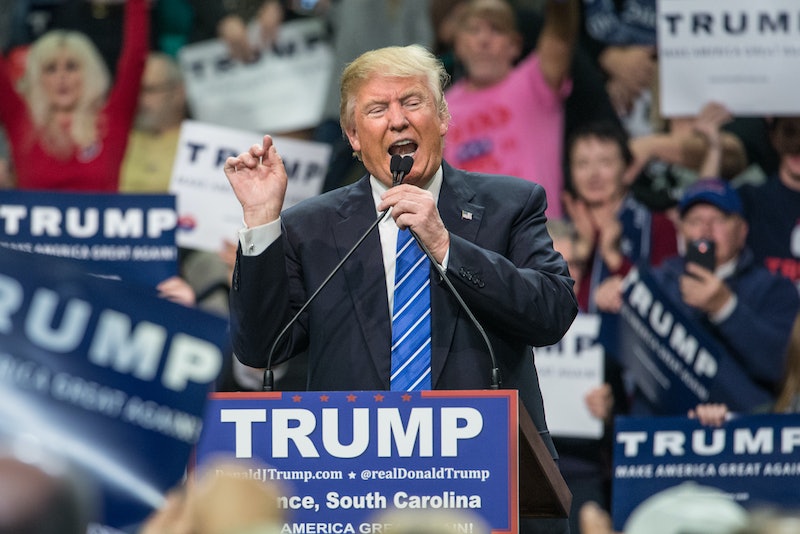 Trying to predict the movements of Donald Trump is mostly an exercise in pure, blind speculation. When you think he's going to zig, he zags, essentially making up his own rules for the campaign trail. His latest hijinks, refusing to participate in the last Republican debate before the important Iowa caucus, show that the mogul is as unpredictable as ever. So while traditional campaign rules would dictate that he be on the ground for the next big show, we have to ask: Will Donald Trump attend the New Hampshire primary?

It isn't completely unprecedented for politicians to be outside of a state as its primary or caucus is going on, but it is a show of good faith to the voters, and face time could garner last-minute results. New Hampshire voters are particularly receptive to such interactions, which, thus far, Trump hasn't delivered. He canceled his Friday campaign activities in the state when his private jet was grounded in New York City's snow storm, and according to political analysts he hasn't been giving the New Hampshire voters the kind of love and attention that they expect.

Still, that doesn't seem to have hurt his polling there. He is still leading in the state running up to the primary on Tuesday, which would be a key win after he was beaten by Ted Cruz in Iowa. This is of particular importance considering Marco Rubio, who slid in behind Trump and Cruz in the Iowa caucus, is polling second to Trump.

Although he has scheduled visits in Plymouth and Manchester leading up to the Feb. 9 primary, the campaign stop tracker P2016 doesn't show the Donald in the state on the actual primary day. Chris Christie, Carly Fiorina, John Kasich, and Rubio all have dates on the books.

Trump isn't the only front-runner who seems to be sitting this out, though. Cruz doesn't have a scheduled stop in New Hampshire on the primary day either, though he's hitting multiple cities in the days leading up to the vote. All of this doesn't necessarily mean that the candidates won't show, but they're likely not doing any campaigning on the actual voting day.

It's likely that Trump and the rest of the candidates will attend rallies held in the state as the primary results roll in. Trump showed up at a Iowa rally to give a weird (and brief) concession speech to his supporters in Des Moines. As a front-runner, it'd be strange for him not to show at all on Feb. 9. But this is Trump. If there's any certainty to his campaign at all, it's that we should expect the unexpected.

More like this
Will Archie & Lilibet Attend The Queen's Funeral?
By Sam Ramsden
Here’s Everything You Need To Know About Operation London Bridge
By Bustle UK
How To Watch The Queen's Funeral
By Bustle UK
These 2 Women Could Be America’s First Lesbian Governors
By Tess Garcia
Get Even More From Bustle — Sign Up For The Newsletter