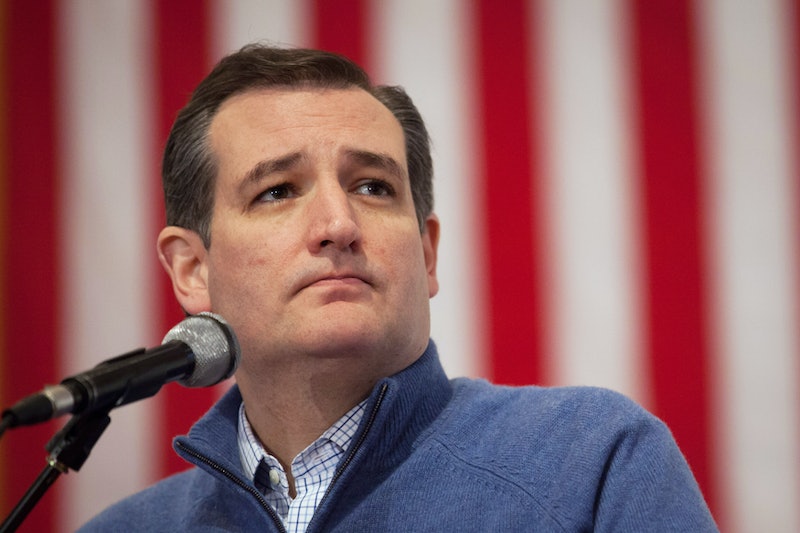 On Saturday night, the Republican presidential candidates faced off for the last time before the crucial New Hampshire primary, the first traditional (non-caucus) election of the 2016 presidential race. There are a few names on the GOP side of the race that have risen to the top of a badly overcrowded field, like Donald Trump, Marco Rubio, and Ted Cruz. The state could prove to be make-or-break for the Texas senator, so you can figure he planned his final pitch carefully ― Ted Cruz's closing statement at the eighth GOP debate was nothing if not self-confident.

It must be stressful to take the stage with so many debate opponents, and to know how hard it is to craft a closing statement that'll cut through the noise and have any kind of impact. Even Trump, who's typically been the most boisterous, rude, and emphatic of the Republican candidates, has usually petered out by the time the closings roll around, and hasn't delivered any hugely memorable moments.

But Cruz took a shot at it, with millions of people watching at home. Of course, it'll be up to the voters of New Hampshire whether it was sufficiently convincing ― sure, he might be political anathema to a lot of people, but someone must enjoy his style, right? Here's how he rounded out his high-stakes Saturday night.

Every candidate running for president says they will stand up to Washington. The natural follow-up question is "when have ever you stood up to Washington?" Last week we saw a powerful illustration of that. I campaigned in the state of Iowa, four square against the ethanol mandate, something everyone said was political suicide. My two leading competitors both attacked me for it, the governor of the state said 'vote for anyone but Cruz,' and lobbyists spent millions of dollars in attack ads, but I stood and said we should have no mandates, a level playing field, and the people of Iowa put country and our children above the cronyism and corporate welfare. We can turn this country around if we get back to the constitutions, and I will always stand with the American people against the bipartisan corruption of Washington.

If you watched the previous two Republican debates, or you read Cruz's closing statements after the fact, there was one pretty peculiar coincidence you probably noticed. Namely, he began both of them by invoking a certain number of hours.

In the sixth debate, it was "13 hours," a reference to the Michael Bay Bengahzi movie of the same name which was set to debut in theaters (it did not do well). In the seventh, it was "93 hours," in reference to how much longer there was until the first-in-the-nation Iowa caucuses. It's not clear if this was a deliberate strategy or not, and after Saturday's showdown, it was no clearer ― he didn't continue the trend, deciding instead to tout his stand against ethanol mandates in Iowa.

For the record, Cruz entered the night polling in third place in the Granite State at just about 12 percent, behind Trump and Rubio at 30 and 16 percents respectively. In other words, he's got a pretty impossible amount of distance to bridge with voting just days away, so it probably isn't fair to judge his debate performance on whether or not it vaults him to a win. Trump has been leading big in New Hampshire for months upon months ― for Cruz, simply leapfrogging Rubio to claim second place would be a huge victory.