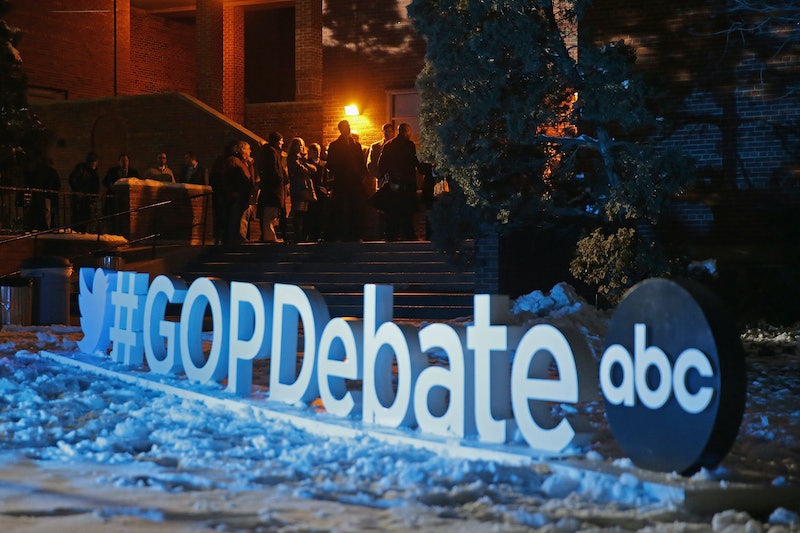 On Saturday night, the top seven GOP presidential candidates duked it out on stage at Saint Anselm College in New Hampshire. As with all the past presidential forums, Twitter ran rampant with hilarious GOP debate memes and jokes. Who says you can't have a little fun with serious politics?

Jeb Bush, Ben Carson, Chris Christie, Ted Cruz, John Kasich, Marco Rubio, and Donald Trump all had a podium at the last event before the New Hampshire primaries on Tuesday. Carly Fiorina didn't qualify for ABC News' debate — neither did Jim Gilmore, but that was less of a surprise. With less candidates still in the race, ABC News nixed the undercard debate that's been happening since the 2016 debate season began back in August, so Fiorina and Gilmore weren't given any air time. Following the Iowa caucuses, the top three contenders — Cruz, Trump, and Rubio — were the moderators' main focus, receiving the most questions and attention and attacking one another more than the other men on stage.

Jokes about the GOP debate ranged from disagreements about the candidates beliefs to quips about the Republican party as a whole. Here are some of the funniest memes and tweets about Saturday's debate.

On The Teacher's Pet

Clearly there was a lot to laugh about.